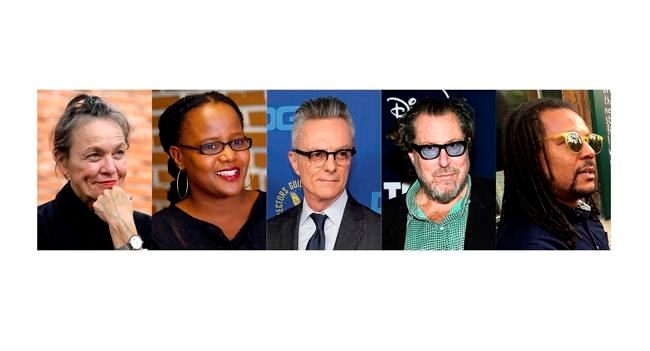 NEW YORK — Like many incoming members of the American Academy of Arts and Letters, Laurie Anderson didn't know a lot about the venerable society until she was asked to join it.

“I had only a hazy idea of what it was so I was a little mystified," Anderson says of the academy, which, among other programs, gives out hundreds of thousands of dollars annually in grants and awards.

“Now that I know what it is — and especially what it does — I’m very excited to be part of this group and hope to make a contribution."

Anderson, the celebrated multimedia artist, is one of 13 new inductees to the academy, founded in 1898. The group began as almost exclusively white and male, and was averse to modernism and other new art forms. But the artists voted in this year reflect an openness to diversity and experimentation that has grown noticeably over the past few decades.

“I believe that it is the Academy's intention to have a membership that recognizes excellence and reflects the world as it is today,'' says architect Billie Tsien, the academy's president. “In this way the Academy becomes enriched and connected to a larger world."

Danticat, a Haitian-American whose books include the memoir “Brother, I'm Dying" and such works of fiction as “The Dew Breaker" and “The Farming of Bones," said she wished her parents were alive to see her — an immigrant and child of immigrants — voted into the academy. In a recent email to the AP, the 51-year-old Danticat remembered attending a 2005 academy ceremony at which she received the Benjamin H. Danks Award to “encourage young writers."

“I went to the ceremony with my newborn and a friend of mine held her while I sat on stage and took a picture with so many writers who were members of the academy," she wrote. “It was a day I will never forget, in part because of the juggling I was doing, but also because so many wonderful writers were there."

The new members will be formally inducted during a May 20 ceremony at the academy's Beaux Arts complex in Upper Manhattan. New Yorker editor David Remnick, an academy member, will give the keynote address.

The academy has 250 core members in literature, music, art and architecture. New members are elected after a previous inductee has died. Past inductees have ranged from Henry James and Toni Morrison to Dizzy Gillespie and Edward Hopper.

German restaurant takes novel approach to keep cider flowing
Apr 5, 2020 12:28 PM
Comments
We welcome your feedback and encourage you to share your thoughts on this story. We ask that you be respectful of others and their points of view, refrain from personal attacks and stay on topic. To learn about our commenting policies and how we moderate, please read our Community Guidelines.