Prosecutor: Victim confided in Durst and it got her killed 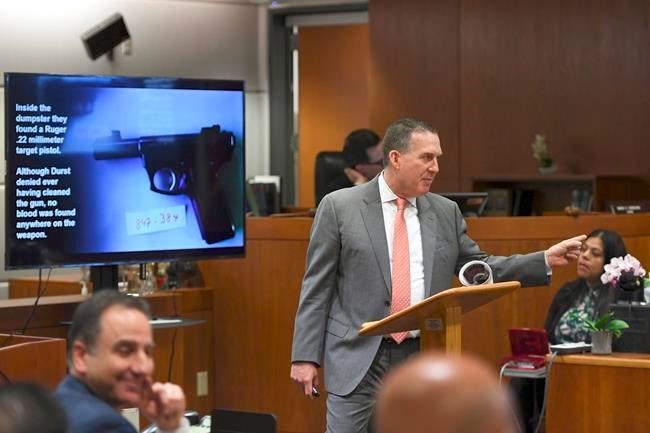 Durst allegedly told Berman that she should agree to be interviewed, but privately made his own plan.

“Though he told her, ‘Go talk to them,’ he also decided to kill her," Los Angeles Deputy District Attorney John Lewin told jurors during a second day of opening statements in the trial of the wealthy New York real estate heir.

Durst, 76, has pleaded not guilty to murder in the 2000 killing of Berman in her Beverly Hills home.

Lewin outlined the last days of Berman's life, when Durst was scrambling around the country, stockpiling money and setting up the false identity because authorities had reopened the investigation into the 1982 disappearance of his wife.

Durst has never been charged in connection with the disappearance of wife Kathie Durst, who was later declared dead. But prosecutors in the Berman murder trial have been allowed to present evidence that Durst killed her, told Berman — who acted as his spokeswoman and helped him cover his tracks — then shot Berman in fear of what she might tell investigators.

Lewin said that while New York detectives did in fact intend to talk to Berman, and had already spoken to her friends, they hadn't actually approached her yet and did not say why she might have told Durst they had. It was a fatal error because Durst believed it and acted on it, the prosecutor said.

Durst was already on the run at the time of the conversation after learning police were investigating his wife's death again. He began stockpiling cash, stopped using his cellphone, married a woman he had dated previously and signed over power of attorney to her in what he called a “marriage of convenience." He rented a small apartment in Galveston, Texas, where he would live and pose as a mute elderly woman.

Authorities have never been able to place Durst in the Los Angeles area at the time of Berman's killing, but Lewin laid out the circumstantial evidence of his whereabouts, using records on flights Durst took, a calling card he used and an SUV he took out of storage to show that he arrived in Northern California four days before Berman was killed and flew out of San Francisco the night after.

Lewin then told jurors of evidence familiar to viewers of “The Jinx,” a letter sent to police that had Berman's address and the word “CADAVER” on it. Durst's attorneys conceded in the run-up to trial that Durst had written it but have yet to explain it, and prosecutors played a clip of a Durst interview in which he says only the killer could have written it.

“The Jinx” will play a major role throughout the trial, with Lewin telling jurors Thursday that Durst had gotten involved in the project because of his interest in the 2010 Ryan Gosling film based on his life and the disappearance of his wife, “All Good Things.” Jurors will watch the movie, along with clips of a commentary track Durst did for it.

Durst sought out the film's director, Andrew Jarecki, and agreed to be interviewed by Jarecki for a documentary that would become “The Jinx," Lewin said. Lawyers strongly advised Durst against being interviewed, but he ignored them because he “loves media attention,” the prosecutor said.

“Bob Durst does whatever Bob Durst wants to do," Lewin said.

Lewin played the jury the most notorious moment from “The Jinx,” in which Durst, walking to the bathroom during an interview break, mumbles to himself on a hot mic, which captured him saying, “There it is, you're caught,” and “killed them all of course."

The , which will give its opening statement next week, is likely to attack the clip as deceptively edited.

Nine months after Berman's death, while hiding in Galveston, Durst was arrested and charged with killing his elderly Morris Black. At his trial in 2003, Durst told jurors that Black had been in his apartment with a gun that went off accidentally during a struggle that killed Black.

Durst testified that he dismembered the body and threw it in the Gulf of Mexico but was acquitted.

Los Angeles prosecutors are being allowed to use evidence of Black's killing in the Berman case, and Lewin made it clear he essentially intends to show Durst was guilty of murder in that case.

Lewin gave a detailed account of the dismemberment and repeatedly told jurors that Durst “murdered” Black, prompting one of several clashes with Durst's lawyer, Dick DeGuerin, who was also his attorney at the Texas trial.

“He was found not guilty,” Lewin snapped in response.

“There's not much difference," DeGuerin said.

“Oh, yes there is!” Lewin shouted.

The judge overruled DeGuerin's objection and repeatedly urged the lawyers to calm down.