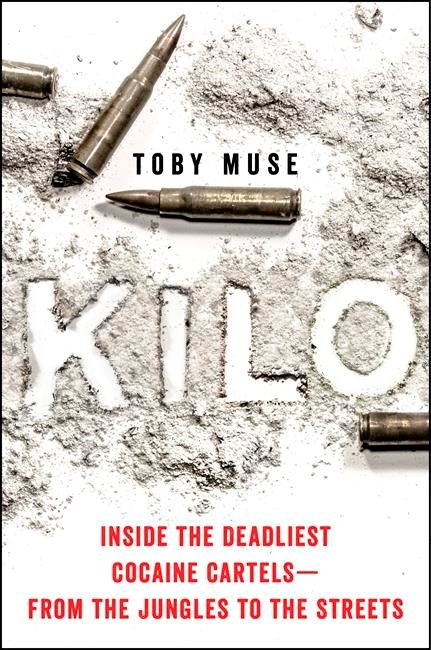 “Kilo: Inside the Deadliest Cocaine Cartels – From the Jungles to the Streets,” William Morrow/Harper Collins, by Toby Muse

Recreational and party drug use in America rarely is portrayed as the terminus of a chain of pollution, human trafficking and murder.

A kilo refers to the standard brick of cocaine; ``Kilo'' the book details the violence and corruption that bloodies every step of its global trade.

For example, drug lords frequently require the services of assassins for hire, some of whom have killed so many people they can’t remember the total. Ordinary Colombians, in Muse’s telling, are so anesthetized to the killings that they respond that the latest victim “must have done something.”

“Something” can be any number of ways of interfering with the narco groups that control the cocaine trade. Muse says few of the mostly young men drawn into the trade expect to see their 30th birthday.

Cocaine that arrives in the United States, Europe and Asia is the end product of a process that begins with remote farms and clandestine, high-polluting processing sites. Multiple criminal steps later, the cocaine is retailed around the world.

Colombia emerges in “Kilo” as a class-riven nation rich in nature’s gifts. The underclass sees the cocaine trade as its only avenue to wealth, status and power.

“Kilo” is mostly anecdotal and observational, and Muse writes with the staccato style of a . He stretches for original descriptions, writing of one character, for example, as having “the look of a man who would burp in your mother’s face.” Ah yes, that look.

How Muse persuaded coca farmers, traffickers, prostitutes and assassins to speak to him about the cocaine trade is a mystery. How he survived all the meetings with his subjects is a miracle. The F word is frequently used as an adjective, both by Muse’s sources and the author himself. It contributes to the book's numbing tone, and its depiction of degradation so widespread and pervasive as to be incomprehensible.

The drug user is the last stop on this trail of bloodshed, torture and ruin.

Sometimes, a beam of sunlight brightens an otherwise dark day. Muse tells how some Colombians adopt unmarked tombs of those murdered in the drug trade. They keep the graves clean, making sure that while the victims are anonymous, they are not forgotten.

If Colombians could just get an honest, courageous government, Muse says, farmers would give up coca cultivation and return to growing fruits and vegetables. Those would replace the 2 or 3 tons of cocaine that he says leaves Colombia every day.

And that would mean no new work for those quiet grave tenders.