The Governor General's resignation and Kamala in Canada: In The News for Jan. 22 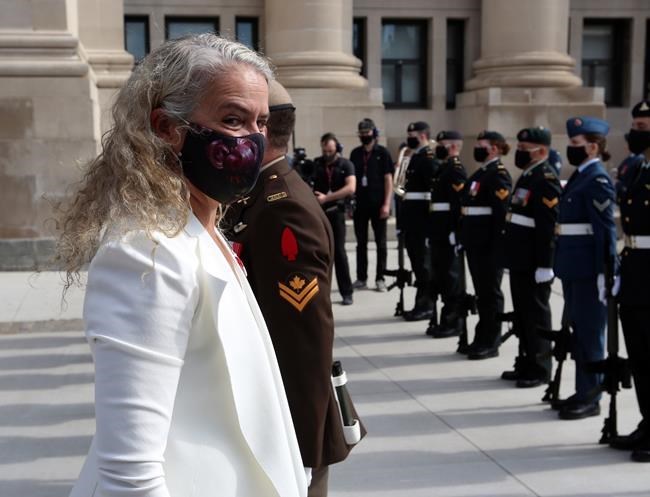 In The News is a roundup of stories from The Canadian Press designed to kick-start your day. Here is what's on the radar of our editors for the morning of Jan. 22 ...

Payette resigned Thursday, about a week after the government received the damning findings of an independent investigation into allegations that she presided over a toxic work environment at Rideau Hall.

LeBlanc says the report, commissioned by the Privy Council Office which he oversees, came to "compelling" and "stark" conclusions.

He says the debacle of Payette's tenure shows that the vetting system for such appointments needs to be strengthened.

At his biweekly briefing today on the COVID-19 pandemic, Trudeau can expect to be pummelled with questions about his judgment and his government's failure to check with Payette's former employers at the Montreal Science Centre and the Canadian Olympic Committee, where she faced similar allegations of harassing and bullying subordinates.

OTTAWA — New internal reports from Veterans Affairs Canada show Canadian veterans have been waiting longer and longer in recent years to get psychiatric services and other medical support at government-run clinics.

The reports obtained by The Canadian Press through access-to-information requests show most veterans had to wait months for their first appointments with psychiatrists or to start work on treatment plans.

The same was true for getting medical exams at what are known as operational stress injury clinics, to apply for disability benefits.

The reports show COVID-19 made it harder to get a medical exam or first appointment to start creating or implementing a treatment plan, but that wait times at the clinics had been steadily growing since at least 2017.

Experts say the new reports are concerning because of the importance in responding to requests for mental-health support as soon as possible to keep veterans from having to struggle on their own.

Veterans Affairs is blaming a surge in requests for assistance over the past five years, and says it has increased funding to address a shortage of mental-health workers that has left some clinics understaffed.

WASHINGTON — Senate Republican leader Mitch McConnell is proposing to push back the start of Donald Trump's impeachment trial to February to give the former president time to prepare and review his case. H

House Democrats who voted to impeach Trump last week for inciting the deadly Jan. 6 Capitol riot have signalled they want to move quickly to trial as President Joe Biden begins his term, saying a full reckoning is necessary before the country — and the Congress — can move on.

But McConnell in a statement Thursday evening suggested a more expansive timeline that would see the House transmit the article of impeachment next week, on Jan. 28, launching the trial's first phase.

After that, the Senate would give the president's defence team and House prosecutors two weeks to file briefs. Arguments in the trial would likely begin in mid-February.

"Senate Republicans are strongly united behind the principle that the institution of the Senate, the office of the presidency, and former president Trump himself all deserve a full and fair process that respects his rights and the serious factual, legal, and constitutional questions at stake," especially given the unprecedented speed of the House process, McConnell said.

Senate Majority Leader Chuck Schumer is reviewing the plan and will discuss it with McConnell, a spokesperson said. The two leaders are also negotiating how the new 50-50 Senate will work and how they will balance other priorities.

The first treaty to ban nuclear weapons entered into force today, hailed as a historic step to rid the world of its deadliest weapons but strongly opposed by the world's nuclear-armed nations.

The Treaty on the Prohibition of Nuclear Weapons is now part of international law, culminating a decades-long campaign aimed at preventing a repetition of the U.S. atomic bombings of Hiroshima and Nagasaki at the end of the Second World War.

But getting all nations to ratify the treaty requiring them to never own such weapons seems daunting, if not impossible, in the current global climate.

When the treaty was approved by the UN General Assembly in July 2017, more than 120 approved it. But none of the nine countries known or believed to possess nuclear weapons — the United States, Russia, Britain, China, France, India, Pakistan, North Korea and Israel — supported it and neither did the 30-nation NATO alliance.

Japan, the world's only country to suffer nuclear attacks, also does not support the treaty, even though the aged survivors of the bombings in 1945 strongly push for it to do so. Japan on its own renounces use and possession of nuclear weapons, but the government has said pursuing a treaty ban is not realistic with nuclear and non-nuclear states so sharply divided over it.

Nonetheless, Beatrice Fihn, executive director of the International Campaign to Abolish Nuclear Weapons, the 2017 Nobel Peace Prize-winning coalition whose work helped spearhead the treaty, called it "a really big day for international law, for the United Nations and for survivors of Hiroshima and Nagasaki."

A trade organization representing Canada's movie theatres is calling on British Columbia health officials to explain why cinemas in the province can only open if they're operating as restaurants or bars.

Nuria Bronfman, executive director of the Movie Theatre Association of Canada, says COVID-19 guidelines that allow theatres to project sporting events on the big screen, but not movies, "highlights the kind of absurdity of what's happening" in the province.

Vancouver's Rio Theatre is moving forward with plans to reopen on Saturday by pivoting its business to operate as a bar. The city's Hollywood Theatre made a similar move in December.

Both rebrandings were applauded by the province's health ministry in a statement that recognized "the arts and culture sector who have worked hard to find new ways to reinvent themselves during the pandemic."

Bronfman says the movie theatre group takes issue with suggestions that movie theatres should be embracing "ingenuity in order to survive."

A Winnipeg cartoonist says he is honoured to play a small role in a historic moment after his comic book about U.S. Vice-President Kamala Harris was included in a Canadian celebration of Joe Biden's inauguration.

“Kamala in Canada” by Kaj Hasselriis was part of a swag bag given to people who attended a virtual inauguration event at the United States embassy in Ottawa.

The comic follows Harris during her time living in Montreal as a teenager.

Hasselriis says he was inspired when he heard how a young Harris staged a protest after her landlord banned kids in her apartment building from playing soccer in the courtyard.

He says many kids may have given up, but Harris chose to take action.

Hasselriis says he hopes the book shows children that they can make change happen and inspires them to get involved in politics.

“It’s useful for them to know that politicians were once kids themselves,” he said. “And if you are a kid, that means you could one day grow up to become a leader.”

This report by The Canadian Press was first published Jan. 22, 2021