Toronto blockade cleared and a slow-blooming spring; In The News for Feb. 26 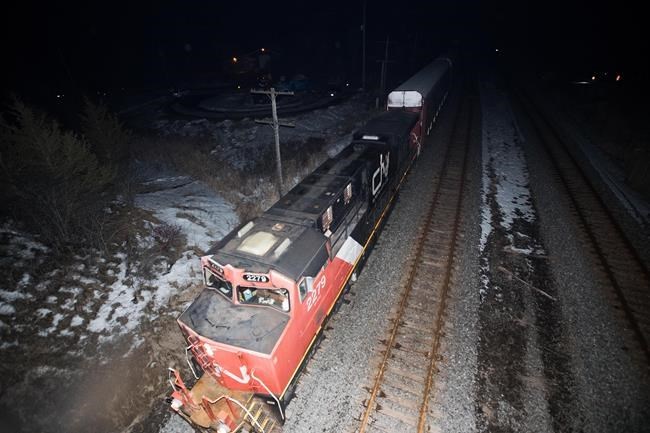 In The News is a roundup of stories from The Canadian Press designed to kickstart your day. Here is what's on the radar of our editors for the morning of Feb. 26 ...

TORONTO — Police say they have made three arrests after a protest emerged Tuesday evening in Toronto's west end as part of ongoing demonstrations in support of a British Columbia First Nation.

Police say in a tweet this morning that officers provided protesters with an injunction and began moving them from rail tracks.

They say most were co-operative, but "arrests were made when necessary."

The blockade threatened to delay morning commutes west of the city, but police say the rail line has been cleared.

Nationwide rail and road blockades have been popping up for weeks as a show of support for the hereditary chiefs of the Wet'suwet'en Nation in northwestern B.C. who oppose a natural gas pipeline project cutting across their traditional territory.

In the last two days, demonstrators set up new sites in Ontario and Quebec, including one that has affected a major commuter rail system serving a huge swath of southern Ontario.

A protest at a Hamilton GO station caused numerous cancellations and delays since Monday evening, but local police said protesters left the blockade site in the city peacefully at around 5 p.m. Tuesday.

Two out of three groundhogs got it wrong, at least that's what the Weather Network's spring forecast indicates.

While Nova Scotia's Shubenacadie Sam emerged from his burrow early this month and predicted a long winter, the groundhogs in Ontario and Quebec suggested spring would arrive early.

Chris Scott says spring will be "slow to bloom" across most of Canada.

While there may be periods of warmth in March, April and May, he says it will take time for those pleasant temperatures to stick.

Scott is calling for a superb ski season in most of British Columbia with the possible exception of Victoria and Saanich, where temperatures are forecasted to heat up faster.

But moving east, temperatures will average about normal, with ups and downs in between.

Scott says early spring snowstorms are possible in parts of Saskatchewan and Manitoba.

NEW YORK — Following an FBI raid on his Manhattan headquarters over sex assault allegations, Canadian fashion mogul Peter Nygard says he is stepping down as chairman of his company.

In a statement, Frydman says Nygard's priority is the welfare of the thousands of his employees, retail partners, loyal customers, vendors, suppliers and business partners.

The FBI searched the designer's Times Square offices Tuesday, less than two weeks after 10 women filed a lawsuit accusing Nygard of enticing young and impoverished women to his estate in the Bahamas with cash and promises of modelling opportunities.

Several plaintiffs in the suit said they were 14 or 15 years old when Nygard gave them alcohol or drugs and then raped them.

Nygard has denied the sex-trafficking claims through a spokesman, notes that he has not been charged, is not in custody and is co-operating with the investigation.

His infection and many others are connected to a southeastern city where the government has been mobilizing public health tools to contain the virus.

South Korea said 216 of the 284 new cases were confirmed in Daegu and surrounding areas.

The U.S. soldier is quarantined at his off-base home and several base facilities are closed.

South Korea's total is expected to rise as health workers test members of a Daegu church that has an infection cluster.

China reported another 406 cases and 52 deaths, all in hard-hit Hubei province.

CALGARY — Two decades after going to his high-school prom with his female best friend as a date, Mike Morrison is about to get a re-do.

This time, he'll be on the arm of his boyfriend of eight years, Richard Einarson.

The Centre for Sexuality, a sexual health not-for-profit in Calgary, is holding its first ReProm fundraising gala on Saturday. It's a chance for LGBTQ people and their allies to re-experience a teenage milestone as their true selves — something that might not have been possible the first time around.

An adult prom was held in a community centre as part of Regina's Queen City Pride festivities last year. When Morrison heard about it, he pitched doing something similar with the Centre for Sexuality.

Morrison hadn't come out when he was in high school in New Brunswick and didn't know of any classmates who had.

Prom itself doesn't hold any negative baggage for him, though. He had a great time with his platonic date and they remain close friends.

SHERBROOKE, N.S. — A U.S.-based conservation group has chosen a site in Nova Scotia where it plans to build a kind of retirement home for whales raised in captivity.

The Whale Sanctuary Project says it wants to provide a home for about eight whales in a 40-hectare inlet southeast of Sherbrooke, N.S., at Port Hilford, along the province's rugged and lightly populated Eastern Shore.

Charles Vinick, director of the non-profit group, says it still requires provincial and federal permits and an estimated $12 to $15 million for capital costs.

The project involves installing nets to enclose an inlet, creating an area where the retired orca and beluga whales are free to swim and dive deeply, while still being fed and cared for by the group.

"You might think of it as retirement, or assisted living," says Vinick.

"These whales have raised tens of millions of dollars for their park owners, and they've entertained millions of people, and we owe something back."

The Whale Sanctuary Project's objective is to have the sanctuary ready to receive whales by the end of 2021.

The Walt Disney Co. has named a new CEO, only the seventh in the company's history. Who is Bob Chapek replacing?

(Keep scrolling for the answer)

A bomb built by Islamic extremists exploded in the parking garage under New York's World Trade Center, killing six and injuring more than 1,000 people. Four were convicted the following year and sentenced to life in prison.

Drugmaker Moderna has shipped its first batch of a possible coronavirus vaccine for humans to government researchers for testing.

Shares of the biotech company soared early Tuesday, a day after the company said it sent vials to the National Institute of Allergy and Infectious Diseases for early-stage testing in the United States.

More than 80,000 people have been infected globally from the viral outbreak that began late last year in China. A total of 35 cases have been reported in the United States.

More than 2,600 people have died from the virus in mainland China, including one U.S. citizen.

MADRID — Spain's court has overturned a previous verdict that found a rapper guilty of exalting terrorism and humiliating victims of attacks in tweets.

Cesar Montana Lehmann of the Def Con Dos rock band had been sentenced to one year in prison by the country's Supreme Court for a series of tweets in 2013 and 2014 in which he talked about sending a cake bomb to former King Juan Carlos I on his birthday and said that some politicians made him long for a former armed leftist group.

The singer, whose stage name is Cesar Strawberry, was also banned from holding any public position for more than six years.

Amnesty International and other rights groups had campaigned on Montana's behalf.

Bob Iger. Iger will become executive chairman of the company. He says it was an "optimal time" for him to step down following Disney's acquisition of Fox's entertainment assets and the launch of Disney Plus streaming service in November.

The latest developments on COVID-19 in Canada
Apr 5, 2020 4:21 PM
Words to remember: Canadian newsmakers have their say on COVID-19
Apr 5, 2020 3:53 PM
House of Commons seeking virtual sittings in ongoing COVID-19 shutdown
Apr 5, 2020 3:24 PM
Comments
We welcome your feedback and encourage you to share your thoughts on this story. We ask that you be respectful of others and their points of view, refrain from personal attacks and stay on topic. To learn about our commenting policies and how we moderate, please read our Community Guidelines.