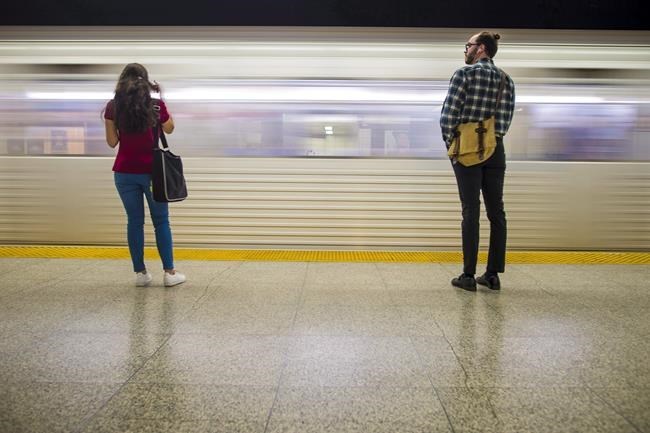 Some Canadian transit agencies are quietly taking steps to protect customers against the novel coronavirus that's been sounding alarm bells around the world.

Several say they have stepped up efforts to clean vehicles and stations and switched to more aggressive anti-microbial cleansers as a precaution.

Public transit services say there is still no need for concern even as the number of Canadians diagnosed with the virus known as COVID-19 continues to climb.

Health officials have recorded at least 33 cases in the country so far, with Ontario reporting the highest number at 20.

One regional transit provider operating a heavily travelled bus and rail network in southern Ontario says it has already documented one instance of an infected passenger travelling on one of its vehicles.

Metrolinx spokeswoman Anne Marie Aikins says long-lasting disinfectant spray was tested on one of its GO Transit trains recently, and is being rolled out to the entire network after a patient who tested positive for COVID-19 used one of its vehicles to travel home from the airport.

Aikins said the product primarily targets bacteria and mould rather than viruses, but the company views it as a sensible precaution.

"We think it's just incumbent on us to do whatever we can to protect our staff and our customers," she said.

Aikins said the presence of an infected passenger was not unexpected and could happen again as the outbreak runs its course, but the company is prepared.

Aikins said the bus on which the patient travelled has also been taken out of service for thorough decontamination. All other vehicles and terminals are being subjected to more regular cleaning, she said, adding hand sanitizer is also being made more widely available to passengers.

Railings and other regular points of contact in TTC stations are getting daily wipedowns rather than weekly, he said, adding a disinfectant wipedown has also been added to the daily bathroom-cleaning routine.

Similar measures are in place on the transit provider's subways, buses and streetcars, he said, adding the company is also considering switching to a long-lasting disinfectant.

Green said the TTC's action plan is based on advice from Toronto Public Health, which along with comparable agencies across the country has described the risk of contracting the virus as very low.

Transit agencies in Montreal and Vancouver said they, too, are taking cues from public health officials, who have long maintained that individual measures such as washing hands regularly, covering coughs and sneezes and staying home if ill offer the most effective protection from the virus.

The Societe de Transport de Montreal said it's urging passengers and staff to observe recommended hygiene protocols, but offered no other details.

The outbreak of COVID-19, which originated in the Chinese city of Wuhan, has sickened tens of thousands of people around the world. The global death toll has climbed over 3,100, but Canadian authorities have not reported any fatalities.

Almost nine times more cases were reported outside China than inside it between Sunday and Monday, according to the head of the World Health Organization, Tedros Adhanom Ghebreyesus. The organization, however, has not classified the outbreak as a pandemic, and Ghebreyesus said on Monday that there's still time to contain the spread of the virus.