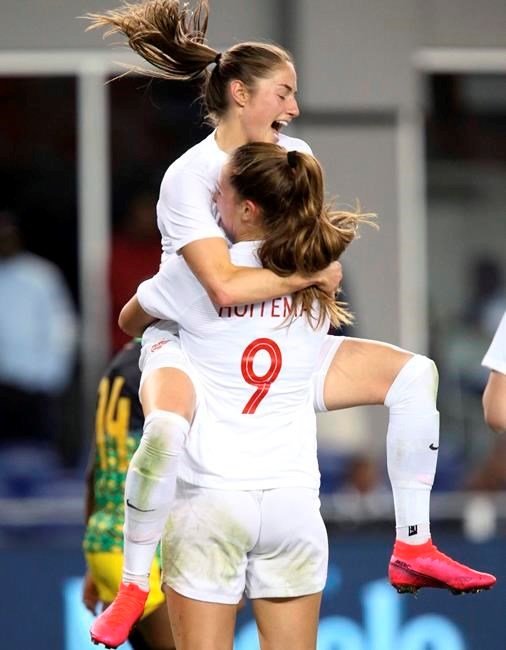 EDINBURG, Texas — With Christine Sinclair watching from the bench, Jordyn Huitema and Janine Beckie proved Saturday there are still plenty of goals left in Canada.

Huitema scored five goals and Beckie added three more as eighth-ranked Canada hammered No. 51 Jamaica 9-0 Saturday to qualify for the semifinals of the CONCACAF Women's Olympic Qualifying Championship with one group game remaining.

Deanne Rose had a goal and three assists for Canada, which can finish atop Group B with a win or draw against No. 26 Mexico on Tuesday.

The Canadian women have now scored 20 goals in two matches at the tournament. The 36-year-old Sinclair became the world's all-time leading goal-scorer with goals No. 184 and No. 185 in Wednesday's 11-0 romp over No. 127 St. Kitts and Nevis.

H-E-B Park has been good to Huitema. The 18-year-old Paris Saint-Germain striker scored four goals here in a 12-0 rout of Cuba at the 2018 CONCACAF Women’s Championship.

The Canadian record for goals in a game is eight by Silvana Burtini (against Puerto Rico in 1998). Burtini also had five (against Mexico in 1994). Huitema is the only other Canadian player to score five in a game. Sinclair has scored four goals in a game four times in her career.

"The front line really connected, really assisted each other in putting some goals in the back of the net," a happy Huitema said after a career-high goal haul.

Huitema has five goals in two games at the Olympic qualifier, upping her international total to 12 in 27 appearances (10 starts).

"A great performance by her and the team as well," said coach Kenneth Heiner-Moller. "She didn't just dribble all the way to the goal herself. She was set up very nicely."

With Ashley Lawrence pulling the strings from midfield, Huitema and Beckie tormented the Jamaicans. While Beckie threatened from the wing, Huitema was deadly in front of goal.

"She's world-class," Beckie said of Huitema. "She's a young player with a lot of talent and a lot of pace and she knows how to finish. She's obviously tall (just under six foot), so that helps her. But she's also a great finisher with her head and with her feet. Really any part of her body she can score with.

"That's a dream as a winger to have someone like Christine and then someone like her in the box. When teams look at us and to look to scout us and they don't see that Christine Sinclair is our only threat any more, that's tough to look at."

Lawrence, the subject of several harsh Jamaica challenges, limped off the field in the 69th minute. Heiner-Moller did not like the Jamaica treatment of his star midfielder but said he expected her to be fine.

Jamaica, which played in last year's World Cup, was a disappointment. The team was unsteady in defence and unable to mount an attack.

"You come up flat against a top-10 team in the world, that's what you get," said Canadian-born Jamaica coach Hubert Busby Jr.

Busby said his team had a "bad case of stage fright."

"We played tentative today. We played scared today," he added.

"When you have world-class finishers on the team, you can put the ball in from anywhere," said Beckie, who plays for Manchester City. "We've been focused on scoring goals. So to score 20 goals in two games after a frustrating World Cup from a goal-scoring perspective is definitely a checked box for us.

"But it's only been two more games. There's still three more games in this tournament."

Huitema opened the scoring in the 10th minute, banging the ball in after a goalmouth scramble that saw two Beckie shots bounce off defenders before the ball came back to the PSG teen to bang the ball past goalkeeper Sydney Schneider.

After an onrushing Rose managed to contort her torso to deflect in an exquisite Beckie cross in the 16th minute, Canada went ahead 3-0 when Huitema slipped the ball over to an unmarked Beckie to knock the ball in.

Beckie and Huitema each scored goals soon after the break to make it 5-0.

Beckie, with a silky-smooth touch to control a long ball from a teammate, then fed Huitema in front for goal No. 6 in the 62nd minute. Four minutes later, Beckie got her own hat trick as Rose squared the ball back to the onrushing Man City player.

An unmarked Huitema got her fourth in the 81st minute with a simple header from a Sophie Schmidt flick-on from an Adriana Leon corner. And the fifth goal came in stoppage time as the Jamaican 'keeper went on a walkabout and Rose found Huitema unmarked in front of goal.

The Canadians wrap up round-round play Tuesday against Mexico (also 2-0-0) with first place in Group B on the line. That's important because the group leader will likely avoid the top-ranked Americans in the tournament semifinals at Carson, Calif.

The U.S. plays Costa Rica on Monday to determine the Group A winner.

The top two teams in each group advance to the final four, with the first-place team facing the runner-up in the other pool. The semifinal winners will represent CONCACAF, which covers North and Central America and the Caribbean, in the 12-team field at this summer's Tokyo Olympics.

Canada has finished runner-up to the Americans in the last three Olympic qualifiers.

The Canadian women have a 20-7 edge over the Mexicans in goal difference so they hold a considerable advantage in the tiebreaker.

Desiree Scott, on the occasion of her 150th cap, captained Canada in Sinclair's absence. It marked the third start as skipper for the 32-year-old holding midfielder from Winnipeg, who becomes the fifth Canadian to achieve the 150-cap milestone (joining Sinclair, Diana Matheson, Schmidt and the retired Rhian Wilkinson).

The Canadian starting 11 came into the game with a combined 859 caps and featured players from Paris Saint-Germain (2), Lyon, Manchester City, the NWSL (5) and NCAA (2).

Jamaica captain and star striker Khadija (Bunny) Shaw was in the lineup despite a hospital visit after a clash of heads with a Mexican defender in the Reggae Girz's 1-0 loss Wednesday. Shaw, who plays in France for Girondins de Bordeaux, was back Thursday but trained on her own.

Canada improved its record against Jamaica to 8-0-0, outscoring the Reggae Girlz 57-1.

Earlier Saturday, four Canadian-based players started for St. Kitts including 14-year-old Kayla Uddenberg and her 17-year-old sister Cloey. Another sister, 19-year-old Carley, came off the bench in the second half.

Wickenheiser, Goyette together again on Toronto Maple Leafs staff
May 17, 2021 10:24 AM