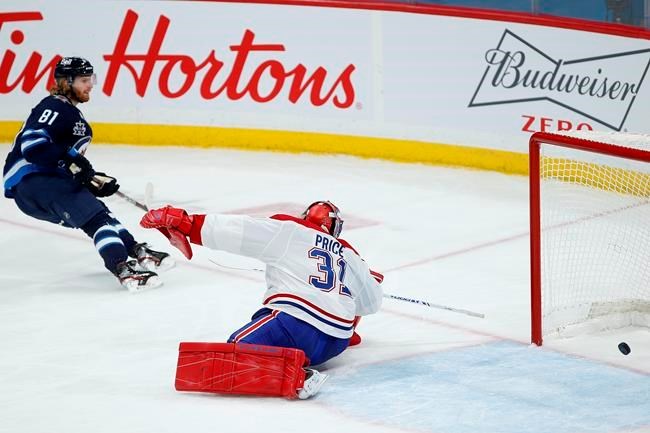 WINNIPEG — Despite a new face behind the bench, the misery continues for the Montreal Canadiens.

"It's shocking obviously," said a sombre Montreal goalie Carey Price. "We've got some changes to make that we'll address here coming up. It's a work in progress."

Nate Thompson scored the go-ahead goal in the third period, while Pierre-Luc Dubois and Mark Scheifele each had a goal and an assist. Blake Wheeler also scored and added two assists for the Jets (12-6-1), who've won three in a row.

"I think there's no panic in this room if we're down two . .  we've got the type of talent that can score in bunches and when we play the right way, it's fun to watch and it's fun to be a part of," Connor said. "I think this is one of the best groups we've had in a while. It's pretty exciting on this team -- we know we're good."

The Habs can't say the same.

"It's a short season, we don't have time to practise and do all this stuff and figure it out. We have to figure it out watching video, and it has to be quick. We're NHL players, it's time to step up and do the stuff we're supposed to do," said Habs forward Jonathan Drouin.

Joel Armia scored twice against his old team, but it wasn't enough for the Habs (9-6-4) to avoid their fourth consecutive loss. Tomas Tatar scored Montreal's other goal, while Jeff Petry had two assists.

Did they do that Thursday?

"I think I saw the guys playing better in the first half of the game, and then we cracked," said Ducharme said, who originally joined the Habs staff in 2018 after 10 seasons in the Quebec Major Junior Hockey League. "So, we've got to be playing the same way as we started."

Price allowed five goals on 29 shots, while Winnipeg netminder Connor Hellebuyck only had to make 18 saves for the win.

Asked about Price's night, Ducharme said: "Like the team. That's it, he's part of the team. I think for me it was the same thing.

"We're going to look at every possibility, we want our guys to be playing our best, and find solutions for every one of them, from the forwards to the Ds to the goalies, so we'll find a solution and Carey's a competitor, I'm not worried," he added.

Armia got Montreal on the scoreboard in the first period with his third goal of the season, firing a shot through the legs of Hellebuyck at 13:45.

Armia notched No. 4 at 17:29 with the Canadiens in transition again. After a gesture from Drouin to head for the net, Armia redirected Drouin's pass past Hellebuyck.

Connor sliced the difference in half on the power play with his ninth goal of the season at 5:37 of a second period that saw three Jets goals, poking in the puck past Price in a scramble in front of the net.

The Habs answered with their own power-play goal from Tatar at 7:33 of the second, but Connor cut the lead to a goal once again, finishing a tic-tac-toe passing play at 11:50.

Drouin was critical of Montreal's power play, which finished 1 for 2 on the night.

"Whatever unit goes on, we're not creating anything, I'm a power-play guy, I gotta be better, I gotta make better plays . . . that's where it is, it's on us, it's not on the coaching staff, it's not on the system, it's about players making the right plays. We don't win many battles when there's a loose puck and that's a big issue for us."

Wheeler scored at 14:31 to tie the game 3-3 heading into the third period.

"It's good," Thompson said on the Jets' ability to come back. "I don't think we want to make a habit of it, but it's nice to know that we're confident in having that kind of deficit during a game and be able to claw our way back and know that we can score some goals and come back and win the game."

Mason Appleton slid the puck to Thompson, who scored through Price's legs for the go-ahead at 6:37 of the third. Dubois padded the Jets lead at 12:37, and Sheifele had an empty-netter at 18:22.

Montreal lost forward Josh Anderson to an injury in the first period. Anderson collided with Jets defenceman Dylan DeMelo. He finished his shift but then headed to the locker-room, and was ultimately ruled out.

The Habs and Jets meet again on Saturday.

This report by The Canadian Press was first published Feb. 25, 2021.