Impact eliminated from Canadian Championship with 3-1 loss to Whitecaps 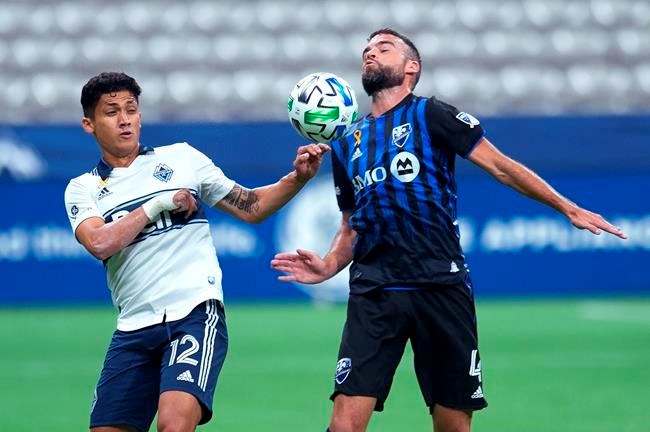 VANCOUVER — While the Montreal Impact would have loved a chance to defend their Canadian Championship, coach Thierry Henry says what the club really wanted on Wednesday was points in the Major League Soccer standings.

Instead, the team dropped a 3-1 decision to the Vancouver Whitecaps.

Montreal needed a win in order to top the table in the round-robin portion of the tournament. The loss means Toronto FC has secured first place instead.

The Impact (5-5-1) went down a man in the 37th minute Wednesday after Rudy Camacho was given a red card for "violent conduct."

The French defender got tangled up with Vancouver's Cristian Dajome in the box. There was no call on the play, but Camacho stayed down on the field for several seconds.

Whitecaps striker Fredy Montero went to help him to his feet but, instead of taking his hand, Camacho punched Montero in the knee, producing a sound that echoed through the nearly empty stadium.

"It had a big impact on the game," Henry said of the red card. "Once again, we're going to learn, hopefully quicker than this, sooner rather than later as they say in English. But I like to stay with the positive. What you saw, obviously, was a massive negative. But I like to talk about it internally."

Vancouver (4-7-0) was awarded a penalty kick, which saw Montero put a low ball in the bottom right corner of the Montreal net for his first goal of the season.

He added a second goal in the 78th minute, collecting a drop pass from Leonard Owusu and sending a rocket past Impact 'keeper Clement Diop.

The 33-year-old Colombian striker nearly had another tally two minutes later, but missed the net. His disappointment was visible as he pulled his jersey over his face.

It was Montero's first start of the season and just his second game since the MLS paused for the COVID-19 pandemic back in March.

"He came in and had a fantastic game. He deserved even the hat trick," said Vancouver coach Marc Dos Santos. "He impacted with the ball, he impacted the in chances created, he impacted the game in the runs in the box. He impacted. And he has to be proud of that and it's well done for him.”

Dajome also scored for the 'Caps, and Thomas Hasal had three saves for the home team.

Romell Quioto had the lone tally for the Impact.

Despite the final score, Henry liked the way his team responded after going down a man, saying they imposed their game on the Whitecaps by maintaining possession and pressing hard.

"It would have been great to make a crazy comeback, but obviously it didn't happen," he said.

Montreal won the Canadian Championship last season after beating Toronto on penalties in the final.

This year, TFC collected two wins over both the Impact and Whitecaps to finish atop the round-robin portion of the tournament.

Who Toronto will face in the final will be determined Saturday, when Hamilton's Forge FC will take on Halifax's HFX Wanderers in the finale of the Canadian Premier League season.

When and where the Canadian Championship final has yet to be finalized.

The MLS scheduled does not currently include another game on Canadian soil this season.

All three Canadian teams will soon travel to the U.S. for their next three matchups. The Whitecaps will play Real Salt Lake in Utah on Saturday and the Impact will head to their temporary home in Harrison, N.J., to host the Philadelphia Union on Sunday.

The stretch is going to require mental toughness and a strong team, Dos Santos said.

He added that adding Wednesday night's win will help create some momentum as they head out on the road.

"Wins like this one allow us to get on the plane with confidence and belief," Dos Santos said.

NOTES: Vancouver's Lucas Cavallini and Montreal's Emmanuel Maciel were both out of the line up, serving suspensions after receiving red cards in the Impact's 4-2 win over the Whitecaps on Sunday. ... Janio Bikel was back in the Whitecaps lineup for the first time since March 7. ... Spanish midfielder Bojan returned to the Impact lineup, coming off the bench in the 78th minute.

This report by The Canadian Press was first published Sept. 16, 2020.

Clark's putback at buzzer lifts Storm past Lynx 88-86
Sep 22, 2020 10:24 PM
Comments
We welcome your feedback and encourage you to share your thoughts. We ask that you be respectful of others and their points of view, refrain from personal attacks and stay on topic. To learn about our commenting policies and how we moderate, please read our Community Guidelines.