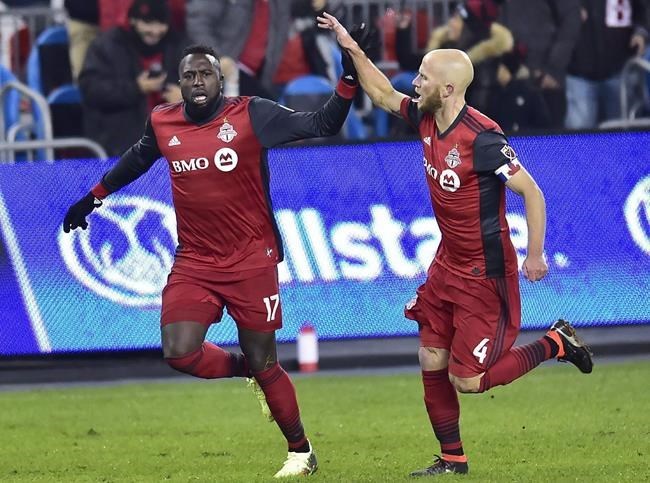 Bradley underwent ankle surgery on Jan. 22 with a recovery time estimated at four months, which takes him to mid-May — some 13 or 14 games into TFC's 34-match regular-season schedule.

The longtime Toronto skipper was hurt at the Nov. 10 MLS Cup final in Seattle but finished the game. The injury did not respond as hoped, requiring surgery.

"During the pre-season Jozy has been the captain for all the games and I don't expect that will change between now and opening day," Vanney told a media conference call Wednesday. "But I will sit down and have my discussion with the guys and with Jozy. As of right now, that's my plan."

Toronto has been training in California since Feb. 5. Prior to that, it spent close to a week in Orlando.

The team is slated to leave its training base of Irvine on Thursday for San Jose. It opted to spend an extra week on the West Coast given the location of the season opener rather than return to Toronto, where it snowed Wednesday.

"Pre-season is pre-season. You just want to get to that first game and get the season started," said Vanney.

Toronto reached the MLS Cup final for the third time in four seasons in 2019, losing 3-1 to Seattle.

Thanks to a surge in the second half of the 2019 season, TFC finished fourth in the Eastern Conference with a 13-10-11 record. San Jose missed out on the playoffs, finishing eight in the West at 13-16-5.

Several players are back in Toronto rehabbing injuries.

Argentine winger Pablo Piatti, an off-season designated player signing, is dealing with a strained hamstring. Midffielder Jahkeele Marshall-Rutty, a 15-year-old homegrown player, was sent home to recover from a concussion.

Midfielder Nick DeLeon is still with the team but is questionable for Saturday's game with back tightness. Venezuelan winger Erickson Gallardo is back training after a groin strain.

The 30-year-old Piatti has played just seven games since undergoing surgery to repair his anterior cruciate ligament in February 2019 when he was with Spain's Espanyol. He lasted only a couple of training sessions with Toronto.

The initial prognosis was he would be out a few weeks.

"I hope when we get back (to Toronto) that we'll have a good sense of where he's at," said Vanney.

Toronto went 3-2-0 in the pre-season with its final game against Chicago Fire FC called off at halftime because of inclement weather at Dignity Health Sports Park in Carson, Calif.

Harper, Matz latest MLBers to contribute to virus relief
Apr 3, 2020 5:07 PM
Comments
We welcome your feedback and encourage you to share your thoughts on this story. We ask that you be respectful of others and their points of view, refrain from personal attacks and stay on topic. To learn about our commenting policies and how we moderate, please read our Community Guidelines.