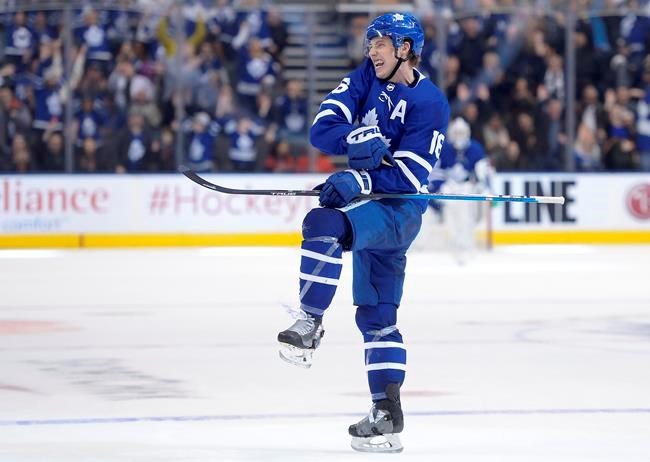 TORONTO — Michael Hutchinson used to watch the Battle of Ontario as a fan of the Maple Leafs.

Jason Spezza was in the middle of the action back then on the other side with the Ottawa Senators.

The winger scored on a power play at 3:54 of overtime as Toronto defeated Ottawa 2-1 on a night where Hutchinson made 24 saves and Spezza turned back the clock with a virtuoso performance than included an end-to-end rush and a stunning equalizer.

After the Leafs (28-17-7) killed off a penalty in the extra period where Senators defenceman Thomas Chabot rattled the post, Toronto got a man advantage of its own and Marner — known more for his vision and play-making ability — blasted his 14th on a one-timer off a feed from William Nylander.

"I don't think anyone really thinks I'm going to shoot that," Marner said. "Luckily it went in."

Mark Borowiecki replied for the rebuilding Senators (18-24-10), who got 34 stops from Craig Anderson after losing 5-3 at home to Washington on Friday.

"We stayed with it," Leafs head coach Sheldon Keefe said. "We knew it was going to be a really hard game, and it was."

Hutchinson, who got the call in place of No. 1 goalie Frederik Andersen with Toronto playing its first of five games in eight nights, improved to 4-0-0 over his last four starts after going winless in his first seven outings this season.

"I've been positive all year," he said. "We have a lot of confidence and our whole team has that swagger back."

The 29-year-old from Barrie, Ont., used to settle down in front of the television to watch Toronto and Ottawa go to war back in the 2000s, and was excited to be part of the action for the first time.

"It was a little extra added atmosphere," Hutchinson said. "It's also cool having Spezza on our side of the Battle of Ontario now. I grew up watching him on the other side of it.

"To be a part of it was pretty cool."

Hutchinson was impressed with Spezza's performance, which was accentuated by a bullet slapshot to tie the game in the second period.

"He was great," Hutchinson said of the 36-year-old nicknamed "Vintage" by teammates. "He turned back the clock with some of those dangles, flying through the neutral zone and that shot."

Spezza, meanwhile, tried to downplay his ties to the Toronto-Ottawa rivalry.

"It's a huge honour for me to play here for the Leafs," Spezza said. "This Battle of Ontario's ingrained in me. I've been on the other side and used to like coming in here and trying to win games.

"But I'm really not trying to focus on all the nostalgia."

Saturday's other big storyline was the Leafs' decision to scratch winger Kasperi Kapanen — the move wasn't injury-related and he watched from the Scotiabank Arena press box — with Dmytro Timashov taking his place in the lineup.

Keefe left a lot open to interpretation at his post-game news conference.

"Internal accountability is really what it is," he said. "You (media) will get a chance to talk to him when we get together again on Monday."

Tied 1-1 through 40 minutes, Anderson robbed the red-hot Nylander, who entered with goals in five straight contests, 36 seconds into the third on a power play when he reached back with his glove to deny the winger.

The lightning-quick Anthony Duclair then had an opportunity at the other end that Hutchinson turned aside.

Anderson then stopped both Justin Holl and Auston Matthews on chances in close as Toronto started to come in waves before John Tavares hit the post and Alexander Kerfoot was stopped off the rush.

Zach Hyman then saw the puck bounce over his stick in the dying seconds of regulation with Anderson way out of position.

After the Leafs had a couple of good looks in front of Anderson early in the second, Borowiecki scored his seventh at 6:08 on a shot through traffic to give Ottawa a 1-0 lead.

Hutchinson was forced to make big saves on Chris Tierney, Jean-Gabriel Pageau and Brady Tkachuk in quick succession before Spezza struck against his former team on the power play.

The Toronto native took a feed from rookie defenceman Rasmus Sandin and ripped a slapshot upstairs, shortside on Anderson for his eighth goal in 40 games — and first on this side of the Battle of Ontario — to match his total from each of the last two seasons with Dallas.

Spezza, who was selected second overall by Ottawa at the 2001 NHL draft and played parts of 11 seasons in the nation's capital, suited up against the Senators in blue and white for the first time after former Toronto head coach Mike Babcock scratched him in the clubs' first meeting on opening night.

"He was buzzing today," said Anderson, one of the few remaining holdovers for Spezza's time in Ottawa. "That was the Jason Spezza of vintage there. Possessing the puck, beating guys through the neutral zone."

The Leafs picked up road wins in Nashville and Dallas earlier this week following an ugly 1-3-2 stretch heading into their bye week and the all-star break that saw them tumble out of a playoff spot in the Eastern Conference, but they are now back in third in the Atlantic Division.

Toronto had Saturday's first chance less than an minute in when Anderson stopped Nylander on a partial breakaway.

Spezza nearly scored on an end-to-end rush later in the period that harkened back to his dominant days with the Senators, but Anderson was there to deny his old teammate.

"He never was a great skater or a fast guy," Anderson said. "But possession was everything with him and he was able to make two, three guys miss like he did tonight.

This report by The Canadian Press was first published February 1, 2020.

Nurse faces a busy off-season, much busier if Canada qualifies for Tokyo Olympics
May 17, 2021 9:30 AM