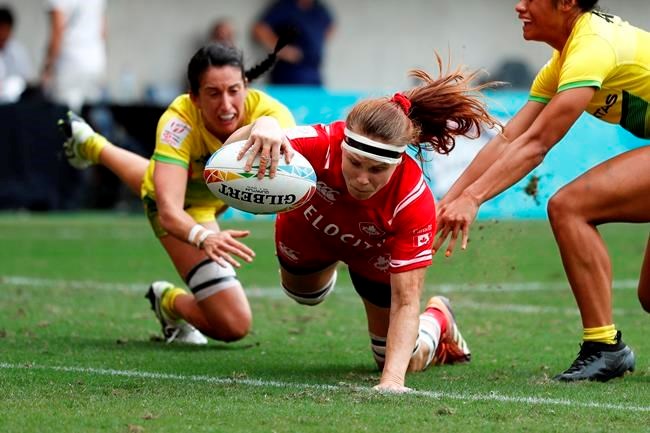 SYDNEY, Australia — New Zealand continued its mastery over Canada on Sunday in the women's final of the HSBC Sydney Sevens, defeating the Canadians 33-7 for the 20th time in 21 career meetings.

The Black Ferns have beaten almost everyone this season, winning 19 straight matches since losing to France in the pool stages of the season opener in October in Glendale, Colo.

After finishing third in Glendale, New Zealand has won tournaments in Dubai, Cape Town, Hamilton and now Sydney. Sunday's win came in the Black Ferns' 250th match on the HSBC World Rugby Sevens Series and extended their perfect record against Canada in Cup finals to eight matches — including three this season.

Thunderstorms, including lightning and torrential rain, delayed the men's and women's finals and forced teams to play in wet and slippery conditions.

The Canadian women's lone win against the Black Ferns came four years ago in Sao Paulo.

Charity Williams answered for Canada, cutting between Sarah Hirini and Stacey Fluhler for the try. Gayle Broughton's try restored the New Zealand lead before the break and scores by Niall Williams, Theresa Fitzpatrick and Alena Saili padded the lead in the second half.

"Canada is such a tough team," said Nathan-Wong, named Player of the Final. "Whenever we play them we know they're going to bring it and they're so physical as well.

"But I knew our girls, if we just stuck together, played to our game plan and kept possession that's what it's all about. If you've got the ball you can score."

The Canadians have finished on the podium the last four tournaments.

Canada's Karen Paquin and Kaili Lukan were named to the tournament's Dream Team.

With 96 points, New Zealand increased its lead atop the overall standings to 16 points over Australia and Canada. France is 10 points farther back in fourth having leapfrogged the U.S.

New Zealand, runner-up in Dubai and winners in Cape Town and Sydney, remains atop the men's standings with 76 points. South Africa, which won in Dubai, is second with 67, ahead of France (56) and England (54). Fiji (53) moved up to fifth place overall with its first win in the Sydney tournament.

The Canadian men, who finished a season-best fifth the previous week in Hamilton, New Zealand, slipped from ninth to 10th overall with 33 points.

The men play next in Los Angeles, starting Feb. 29. The next tournament for women is April 3-5 in Hong Kong.

This report by The Canadian Press was first published Feb. 2, 2020.