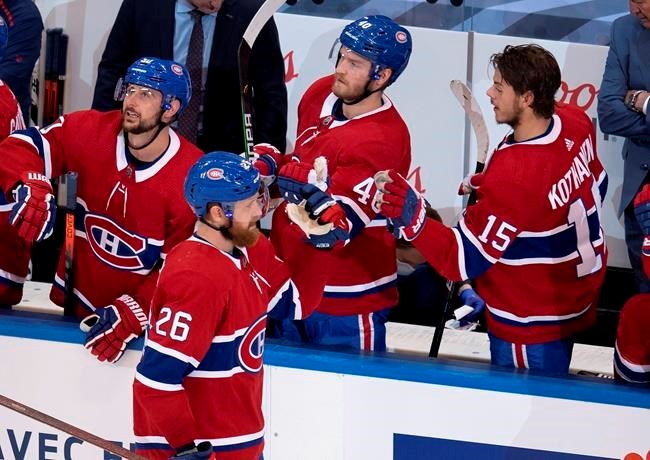 TORONTO — Jeff Petry scored 5:33 into the third period as the Montreal Canadiens rallied from two goals down and beat Pittsburgh 4-3 in Game 3 on Wednesday night, pushing the Penguins to the brink of elimination in the best-of-five series.

Shea Weber had a goal and two assists for Montreal, Paul Byron added a goal and an assist, and Jonathan Drouin also scored. Ben Chariot also had had assists.

Carey Price stopped 30 shots for the Canadiens — the 12th seed in the Eastern Conference as part of the NHL’s 24-team restart to its pandemic-delayed season. Montreal can advance to the normal first round with 16 teams with win in Game 4 on Friday.

EDMONTON, Alberta (AP) — Matthew Highmore tied the score with 5:47 left in the third period, and Jonathan Toews got his second of the game 4 1/2 minutes later to give Chicago a win in Game 3 of the qualifying round series.

On the winner, Oilers Ethan Bear errantly tipped a Chicago point shot off Toews and past goalie Mikko Koskinen. It was Toews’ fourth goal of the series.

Olli Maatta also scored for the Blackhawks, and Corey Crawford finished with 25 saves.

Leon Draisaitl scored twice for Edmonton, and Connor McDavid got his fifth of the series to give the Oilers a 3-2 lead with 8 seconds left in the second period. Koskinen had 21 saves as Edmonton was pushed to the brink of elimination in the best-of-five series.

Mike Hoffman and Brian Boyle scored 2:07 apart in the opening minutes of the third period, and Florida avoided a sweep.

Jean-Gabriel Pageau and Brock Nelson, with 1:27 remaining, scored for the Islanders, the East’s seventh seed. Semyon Varlamov stopped 19 shots and made a costly error leading to Hoffman’s go-ahead goal 41 seconds into the third period.

With Varlamov penalized for playing the puck inside the trapezoid 7 seconds into the frame, Panthers Keith Yandle faked a shot in the high slot, before feeding Hoffman, who blasted the puck in from the right circle.

Boyle made it 3-1 when he corralled a loose puck inside the Islanders zone and snapped a 40-footer inside the left post.

The Coyotes, seeded 11th in the West in the NHL’s restart, can eliminate the sixth-seeded Predators in Game 4 on Friday in this best-of-five qualifying series.

Christian Dvorak scored on Arizona’s first shot of the game, and Coyotes scored three in the third for the victory capped by Carl Soderberg’s empty-netter inside the final two minutes.

The Predators thought they had a 2-1 lead 1:13 into the third period on a goal by Kyle Turris, but the Coyotes won their challenge of offside with Nashville Matt Duchene found over the blue line on review. Turris later hit the post with 6:19 left.

Garland put the Coyotes ahead to stay with his wrister from the slot at 7:08 of the third.

Darcy Kuemper made 39 saves for the victory in his third start in four games and second in two days.

Andrei Vasilevskiy stopped 25 shots for the Lightning, who improved to 2-0 in the three-game round-robin. Tampa Bay would earn the No. 1 seed in the East with a victory over Philadelphia on Saturday.

Tuukka Rask made 32 saves for the Bruins, who led the NHL with 100 points in the pandemic-shortened regular season but can now finish no higher than the No. 3 seed in the Eastern Conference.

Charlie McAvoy and Chris Wagner scored to help Boston rally from a 2-0 deficit. But in the final minutes Yanni Gourde received a long pass at the blue line and shot it off Rask’s left skate. The puck was sitting there for Johnson to flick it in.

Joonas Donskoi, Vladislav Namestnikov and Andre Burakovsky also scored as the Avalanche improved to 2-0 in the three-game round that will determine playoff seeding for the top four teams in the Western Conference. The Stars have lost both of their games and are likely to finish where they started as the fourth seed.

Donskoi scored 3 seconds after a power play ended in the first period, and Burakovsky connected early in the third period after Mattias Janmark was called for tripping late in the second.

Burakovsky’s shot hit the crossbar before deflecting off the back of Stars goalie Anton Khudobin into the net. Donskoi and Burakovsky had assists on the other’s goal.

Pandemic-proof: Fall college football revived on West Coast
Sep 25, 2020 12:13 AM
Comments
We welcome your feedback and encourage you to share your thoughts. We ask that you be respectful of others and their points of view, refrain from personal attacks and stay on topic. To learn about our commenting policies and how we moderate, please read our Community Guidelines.