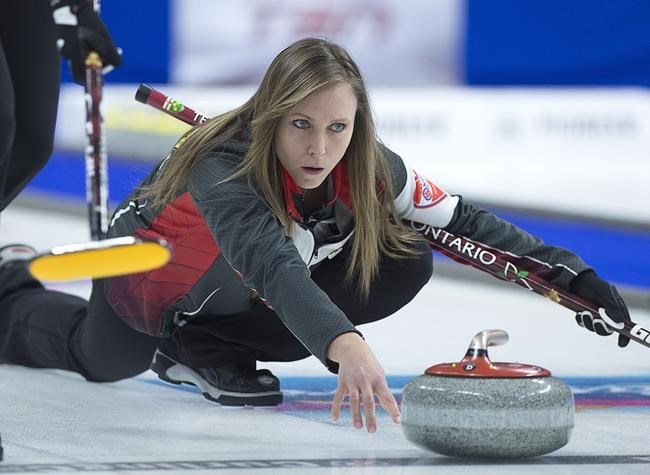 MOOSE JAW, Sask. — Returning to the national women's curling championship in an unusual season for her team is particularly satisfying for Rachel Homan.

The skip and second Joanne Courtney each became moms for the first time last year, adding a layer of unknown to preparation and performance.

Physical recovery from childbirth and how to juggle the travel schedule elite curling demands were puzzles to be solved.

So even for a veteran like Homan, claiming a fifth Ontario women's title to get to the Scotties Tournament of Hearts in Moose Jaw, Sask., had new resonance.

"Some of our family was talking about how it was the most excited they'd seen us at a provincial ever," Homan said Friday of her team's win at the Ontario championship in Cornwall.

"It was definitely a lot of emotion. Maybe not so much tears but so proud of the fight to get back.

"It was just that much more special that we were able to win under different circumstances."

Homan, third Emma Miskew, Courtney and lead Lisa Weagle won Canadian and world titles in 2017, as well as the Olympic trials that year to curl for Canada at the 2018 Winter Games.

The Ottawa Curling Club foursome is a favourite in any competition they enter, including the 2020 Tournament of Hearts.

The main draw at the 4,500-seat Mosaic Place gets underway Saturday.

"You never know how it's going to go," the skip said. "You're always questioning yourself after you go through something major like that. Can you ever play to the level that you were at before?

"It was a lot more than just the off-season. Bringing two new little people on the road with us, trying to figure out how that works, trying to get your rest, trying to perform properly, it's just a very different dynamic."

Considered one of the strongest sweepers in the women's game, it took until December for Courtney to start feeling comfortable again.

"The recovery process, I had to be patient with that," Courtney said. "There's a lot of core involvement with sweeping and obviously your core is affected.

"Now I'm back to a point where I feel I can give it everything I have."

Further reinforcing the team's confidence in themselves was winning December's Canada Cup to secure a berth in the 2021 Olympic curling trials.

Homan and Courtney were both expecting when the team reached last year's Hearts final in Sydney, N.S.

Homan missed draws in the 10th and 11th ends to give up three points and the Canadian crown to Alberta's Chelsea Carey.

"Proud that we made the final, but obviously disappointed in ourselves that we weren't able to finish off that game," Homan said. "You've got to put it in your rearview mirror as quickly as you can.

"We're so pumped to be back and hopefully have another chance to be in that final this year and have a different result."

Sixteen teams representing all provinces and territories, defending champion Carey and the wild-card team are divided into two pools of eight.

"Crazy strong," was Homan's assessment of the field.

"I look at the pools and there's so many tough games. Even some of the teams you might not see on tour, they were in the championship round last year and they were right there, winning or losing on last rock."

The victor Feb. 23 represents Canada at the women's world championship March 14-22 in Prince George, B.C., and returns to next year's Hearts in Thunder Bay, Ont., as Team Canada.

Hearts prize money will equal the men's Canadian championship for the first time with a $300,000 prize purse.

Homan and Courtney both live in the Edmonton area, which caused friction in last year's Ontario championship

Each team at the national men's and women's championship is allowed one athlete from out of province, but Homan also had a residency exemption as a post-secondary student in Alberta.

Curling Canada introduced a birthright status option prior to this season, giving the team relief.

Athletes are now allowed to represent the province or territory where they were born if they live outside those borders.

"I was born and raised in Ontario and always consider myself from Ontario," Homan said.

"I think at the end of the day Curling Canada is trying to find that right recipe to make sure we're still competitive with the rest of the world. They (other countries) don't have provincial restrictions.

"It's tough for us to compete if we're putting restrictions on our players and our team."

This report by The Canadian Press was first published Feb. 14, 2020.

Former Maple Leafs forward, Rangers captain Bob Nevin dead at 82
Sep 21, 2020 11:51 AM
Comments
We welcome your feedback and encourage you to share your thoughts. We ask that you be respectful of others and their points of view, refrain from personal attacks and stay on topic. To learn about our commenting policies and how we moderate, please read our Community Guidelines.