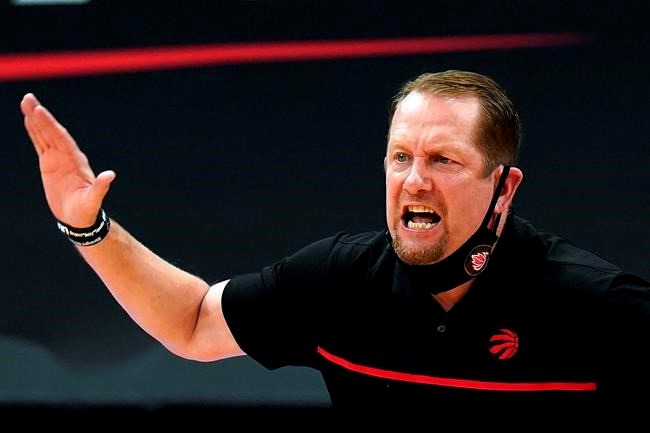 The image of Nick Nurse tugging his mask down to his chin to yell directions at a player, or to argue a call, has drawn the ire of COVID-19 conscientious Toronto Raptors fans.

A day after the NBA announced stricter protocols, with rising cases of the global pandemic among players leading to game postponements, the Raptors coach admitted he has to do a better job.

"Sometimes I'm in the huddle or on the floor, and I'm doing all kinds of things to try to keep my mask on but let guys hear me, and after the third time, (players say) 'Coach, I can't hear what you're saying,': Nurse said Wednesday.

Coaches have been instructed to wear masks at all times, but during the Raptors' first 10 games, Nurse often has been seen on television with his mask pulled down under his nose and mouth.

A handful of NBA games, including three on Wednesday alone, have been called off as more teams deal with virus-related issues. The rising cases prompted the NBA and the players association to enact new rules for at least the next two weeks that include limiting player interactions in games to elbow or fist bumps. Players and coaches must wear masks while on the bench.

Raptors guard Fred VanVleet said he's fine with the stricter rules, but added: "It does feel like it’s getting a bit much from that standpoint, trying to plug holes in a sinking boat. Hopefully we can get past a rough patch here."

Other rules in place for at least the next two weeks: Outside of practices and games, players and staff must stay home when in their home markets, and in their hotels while on the road. Pre-game meetings in locker rooms can't go longer than 10 minutes, and everyone involved must be masked during those meetings.

"We’re human. We all have different emotions and different feelings about it. We feel differently about it everyday," VanVleet said on the restrictions. "If you’re asking me today, I’m not terribly upset about any of the things we have to do. It kind of is what it is at this point. I’m going to try to make the most of it and get through it."

VanVleet blasted a fan during a game at Amalie Arena, Toronto's temporary home arena in Tampa, Fla. Miami Heat forward Duncan Robinson said in a recent episode of his podcast that VanVleet was being heckled during a game.

"(VanVleet) turns around and yells 'Shut up and put on your mask!' and everybody was just like that was awesome," Robinson said.

The words gained traction on social media on Tuesday.

"That wasn’t my doing, I can thank Duncan for that," VanVleet said. "That was just a heat-of-the-moment thing in the game. Gotta get used to having fans again — I don’t have to get used to it now. At that time it was taking a little getting used to having people screaming at you again."

The Raptors were one of a half dozen teams in the league that was permitting fans in limited numbers. The Raptors were selling 3,800 tickets. But as the virus continues to rage in Florida, Vinik Sports Group, which owns the NHL's Tampa Bay Lightning, announced it would be prohibiting fans at the arena, including for Raptors games, at least through early-February.

The Raptors' organization had four COVID-19 results from pre-training camp testing. Whether or not any positive tests were players wasn't revealed. Norman Powell later missed a few days of practice because of possible exposure.

The struggling 2-8 Raptors, who host the Charlotte Hornets on Thursday, have otherwise avoided major issues.

"There's obviously rise for concern, more cases, more contact tracing, obviously a handful of postponements," Nurse said. "They're just trying to step it up a level and do anything they can to keep the games going. We all are OK (following the new protocols), or at least trying to do them to the best of our ability — it isn't always easy."

Wednesday's three postponed games were Utah at Washington, Orlando at Boston, and Atlanta at Phoenix.

This report by The Canadian Press was first published Jan. 13, 2021.