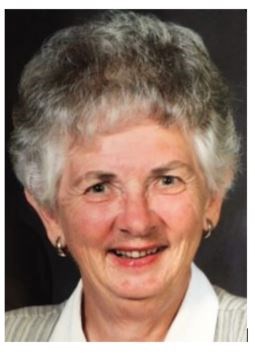 It is with a heavy heart that we announce the passing of our beloved wife, mother, grandmother, sister, cousin and friend Florence Margaret Jobson (nee Herr) on Feb 17, 2021 at the age of 85.

Born in Okotoks, Alberta to pioneer settler families, Mary Stewart and Cliff Herr, this High River Days Glamour Contest winner strode from her pioneer heritage along with the winds of change of the 1960s. An independent, self-reliant and determined spirit she mastered open kettle canning by kerosene lamp at an early age on a mixed farm where she rode her horse Sandy to school with her younger brother in tow. Throughout her life till her very final days she vibrantly continued on with the family penchant for thrift and meticulousness which she expressed through her handicrafts in sewing, knitting, crocheting, quilting, weaving, and spinning (even making her own wool from her brother’s flock of sheep).

She rose from small-town rodeo champ to blending in with the legal community at Columbia University in New York City during the American Civil Rights Movement whilst raising a little one. She studied history at the University of British Columbia before returning to her home province for a teaching career in Hussar, Cochrane and Calgary during which time she met her future husband, Keith Jobson. Over their 57 years together they lived in university communities in Halifax, New York, Ottawa and finally settling in Victoria in 1975 where her husband taught law at the University of Victoria.

Setting her hypermobile gait towards local nature parks with her kindred spirit, Emily, she shared her passion and acute episodic memory of local native flora and fauna with her friends and family, helping to establish Glencoe Cove-Kwatsech Park and Ferndale Forest by her home in Saanich where she raised her children and lived for over four decades. She organized splendid vacations around the country and the world with her family and friends, travelling to Mexico with Keith many times during their retirement. Clipping recipes from Chatelaine into her mum’s recipe binder, she brought the latest “taste sensation” to the table with her distinctive laugh centered by the family tradition of home-grown food and flowers.

She delighted in the extensive network of friends ranging across her career and interests in arts and education, gardening and church. She benefitted from community helping with a consumer rights group in Halifax, Luther Court’s long-term care home, UVic’s student refugee program, Craigdarroch Castle gift shop, Victoria Quilters Guild, Gordon Head Garden Club, First Unitarian Church of Victoria, and Goward House. She enjoyed busy days where she might be doing a bit of gardening, catching a play at the Belfry or a concert at the Royal Theatre, exercising at Goward House, stitching a quilt patch with the Guild, driving Mrs. H. from Oak Bay Kiwanis Pavillion to the hairdresser, editing the Gordon Head Garden Club cookbook with Anne and Barb or catching up with her newsy chats on the phone.

Mum died peacefully at home with friends and family - budding camellias, crocuses, and Baby’s Tears with the twittering of house finches, Anna’s hummingbirds and pine siskins during a sunny break outside her bedroom window across from the forest at Kwatsech.

A memorial service will be held at a future date.