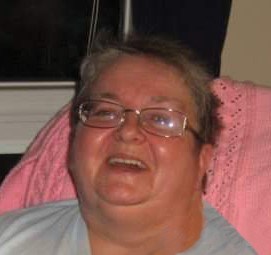 Mrs. Virginia Irene ‘Ginny’ Rasmussen of Innisfail, Alberta, passed away peacefully, with loved ones by her side, at the Red Deer Regional Hospital Centre on Saturday, May 1, 2021 at the age of 69 years.
Ginny was born in Innisfail, Alberta on April 1, 1952, to Bernard and Mildred Williams. She went to school at Caroline, Alberta and lived there until September 2004, before finally moving to Innisfail. Ginny worked at the Caroline School, as a secretary, for over twenty-five years and brought loads of laughter to the school.

Ginny loved doing her cross-stitch and collecting cross-stitch magazines. She also enjoyed watching her favorite show ‘The Young and The Restless’ and never missed an episode. Ginny loved her daughter, Chrissy very much, and loved spending time with her family and friends; as well as having her great nephew and niece stay over for sleepovers. There was always laughter around the house with her around, and she was a very caring person. Ginny also cherished her trips to town with the girls and having a girl’s day out. She enjoyed going camping and loved her cat, Belle, very much. Ginny will be deeply missed by her family and many dear friends.

Ginny will be lovingly remembered by her daughter, Chrissy of Innisfail; her nephews, Darwin of Innisfail, Aaron (Brittany) of Bowden, Bernard of Waterloo, Ontario and her great nephew and niece, Ryker and Annalise; as well as many of her friends.

A Private Family Funeral Service will be held at a later date. If desired, Memorial Donations in Ginny’s honor may be made to the Heart and Stroke Foundation, 100, 119 – 14 Street NW, Calgary, Alberta, T2N 1Z6 or at www.heartandstroke.ca. Condolences may be sent or viewed at www.heartlandfuneralservices.com. Arrangements in care of: Heartland Funeral Services Ltd.  4415 – 49 Street, Innisfail, Alberta. Phone: 403.227.0006   Fax: 403.227.6437