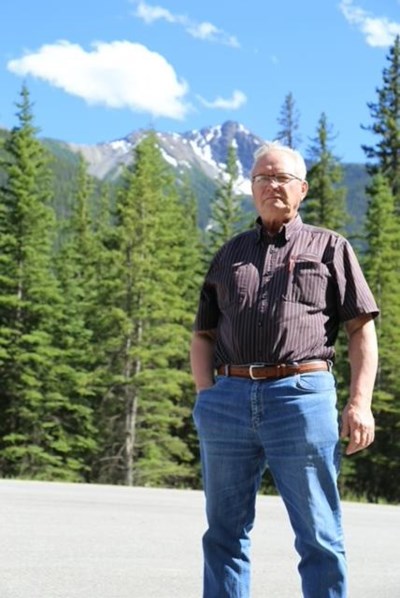 With great sadness the family of Ed Wiebe announces his passing on June 3, 2021 at the Misericordia Hospital at the age of 79 years. He was born September 26, 1941 in Carrot River, SK to Henry and Katherine Wiebe. There they moved to Cranford, Southern Alberta where the entire family worked hoeing sugar beet fields.  They resided in Coalhurst where his father, brother Stan, and himself worked to help build the airport in Claresholm. He worked a ‘mans’ job, and learned the work ethic that has been a part of his entire life, at a young age. He went to Northwest Bible College for 3 years where he met his first wife Betty. Upon graduating he pastored for 10 years in Lethbridge, where he hosted a Sunday Gospel radio show.  He then progressed into self-employment as a barn painter then interior painting and home construction.

Moving to Cowley with his family (that was then 4 kids), he went into road construction and after a number of years purchased an oilfield camp in Northern Alberta. During this time he met his second wife Corinne and they had 2 children together. They then moved to an acreage near Morinville. His last and most enjoyed work was the purchase of a farm and ranch in Northern BC.  Although very busy he enjoyed telling stories, flying, driving his team of big boys, big parties, camping, riding his motor bike, playing the casino and eating ice-cream. He was a dynamic, hardworking provider, proud of his accomplishments and his family.  He would talk to anyone with his toothpick hanging out of the side of his mouth and a bit of a frog in his throat. His umbrella was large and covered many people. Left to cherish his memory are his wife Corinne St. Martin, children Clifford (Leanne), Sheldon (Tammee), Lisa (Dale), and Kalita,10 grandchildren,5 great grandchildren, 3 brothers, 1 sister, and numerous other relatives, co-workers and friends. Edwin was predeceased by his son Wyatt, grandson Alex, parents Henry & Katherine, 3 sisters, and 1 brother.

A Private family Celebration of his Life will be forthcoming. Those wishing to view the service via live stream may do so by going to www.memoriesfuneral.com, opening Ed’s obituary and clicking the following link https://view.oneroomstreaming.com/authorise.php?k=1623192763119277 , at 2:00pm on Friday June 11, 2021.

Memorial donations in memory of Edwin may be made to The Misericordia Community Hospital Covid ICU unit.

To send condolences to the family, please visit