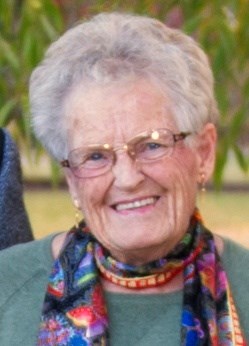 Ruth Vinnetta Windsor died on Saturday, May 1, 2021 at the Olds Hospital & Care Centre at the age of 93 years.

Ruth was born on March 13, 1928 in Viking, Alberta to Laura and Reverend Joseph Bainbridge.  Her father was a United Church minister and they moved several times – Viking, Donalda, Medicine Hat, High River, and Didsbury.  On December 27, 1948, she married her high school sweetheart, George William (Bill) Windsor.  They lived in Edmonton, Rocky Mountain House, and Olds, where they raised six children and Bill taught in the Junior High and then the High School.  In 1984, she and Bill retired and moved to their cabin on Sylvan Lake and she played the organ in the Bentley United Church.

Ruth earned her degree in Music and taught piano lessons for over 40 years.  She sang in choirs, led some, and belonged to the United Church all her life.  She liked to sew and made a lot of the family clothes when they were young.  The family camped often and later, she and Bill became "Snowbirds" in Yuma, Arizona for 14 years, besides many trips to other lands.  They returned to Olds in 1996.

She was predeceased by her parents, an infant daughter, Diane, two grandsons, Russell Windsor and Ty Sparks, and her sister, Doris Claire Fyvie of Calgary.  To continue in this life, Ruth leaves her loving husband, Bill, and children Merrilee (Jim) Walton, Dawn (Tom) Clarke, Laura Windsor, Bill (Kathleen) Windsor, Anne (Nigel) Cameron, and Tom (Sandy) Windsor, as well as 9 grandchildren and their spouses, and 24 great grandchildren.

In lieu of flowers, donations may be made to the STARS Air Ambulance, or to the charity of one's choice.