Long time newsman proudest of initiatives that helped others
Sep 10, 2020 9:57 AM By: Bruce Hogle 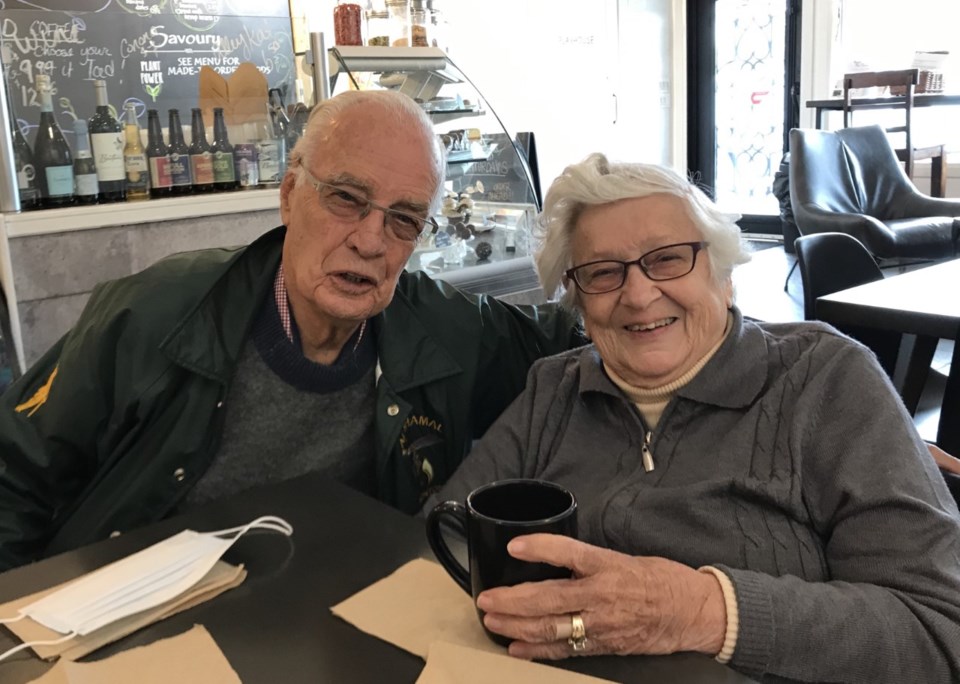 Bruce Hogle (with Gail, his wife of 66 years) has lived a life of firsts, both in a journalism career and compassionate community efforts. Photo: Jack Watt.

For veteran newsman Bruce Hogle (who needed coaxing to write a short list of his 'firsts') there's no denying the list is impressive.

I’m delighted that our federal, provincial and civic governments are working together to cope with the challenge of COVID-19. The phenomenal work by all Albertans and Canadians in fighting COVID-19 reminds me of the challenges I encountered during my almost 50 years as a journalist in seven cities and five provinces, including 31 years at Edmonton's CFRN TV and radio. I remain proud of a first in Canada--Wednesday's Child--which is in its 39th year, Wednesday evenings on CTV. This program creates greater awareness and permanent adoption of those Alberta children with physical, medical and emotional handicaps. Some 80 per cent of all children shown have been adopted.

When Peter Lougheed became Premier in 1971, I persuaded him to allow live CFRN TV coverage of the Alberta Legislature - a first in Canada and the Commonwealth. Another first was the powerful CFRN TV documentary “What About The Victim?” which portrayed horrific crimes in the province. That led to implementation of the Alberta Crimes Compensation Board. Saskatchewan and Manitoba followed suit after the documentary was seen in those provinces.

In 1973, at the height of Alberta’s economic boom, unscrupulous Edmonton landlords started increasing rents as much as four times a year. Hogle editorials identified and named the guilty landlords, resulting in government rent controls. I later established the CFRN Good Neighbour Fund Charity--a program that continues to assist scores of urban and rural families in need.

In 1988, when I learned Canadian journalism universities and colleges depended solely on U.S. electronic teaching aids because none were available in Canada, I rectified the situation with a 30-minute teaching video, shared freely to all those who requested copies. Locally, MacEwan University and NAIT benefitted.

As a Shriner, I approached Alberta RCMP Assistant Commissioner Don McDermid in 2001 to launch “Operation Red Coat/Red Fez”. The aim was for Alberta Mounties to seek out children in need in rural areas where there were no hospitals or medical care.  At no charge, mounties provided procedures for families of those children requiring medical care at 22 Shriners Hospitals. This initiative proved so successful it was adopted by Shriners and RCMP or Provincial Police across Canada. Even New York State Police followed suit.

There is even my claim-to-fame of playing high school football in Sudbury, Ontario with Tim Horton--the original Tim Horton the man, not the coffee shop. I was quarterback and he was half-back. I asked if I could give him advice when he wondered whether to pursue the CFL or play hockey in the NHL. I said 'play hockey'. It worked out well.

Life presents challenges, but I feel fortunate to have worked in the news industry and with great people in the community. Gail and I have a fine place to live, and other than not driving anymore, I don't feel 91 either.

Bruce Hogle started in the news business in his hometown of Prescott, Ontario at age 10, by delivering three newspapers with the encouragement of his dad, a newspaper editor. Hogle has been named a member of the Order of Canada and one of the 100 Edmontonians of the century. As well, Hogle has been inducted into the City of Edmonton Community Service Hall of Fame and the Canadian Association of Broadcasters Hall of Fame. He and wife Gail (with whom he recently celebrated 66 years of marriage)have three sons: Bill, Steve and Randy. The couple lives at Canterbury Court seniors residence in Edmonton.

Commentary: Black Lives Matter: In the aftermath
Sep 7, 2020 9:30 AM
Comments
We welcome your feedback and encourage you to share your thoughts. We ask that you be respectful of others and their points of view, refrain from personal attacks and stay on topic. To learn about our commenting policies and how we moderate, please read our Community Guidelines.