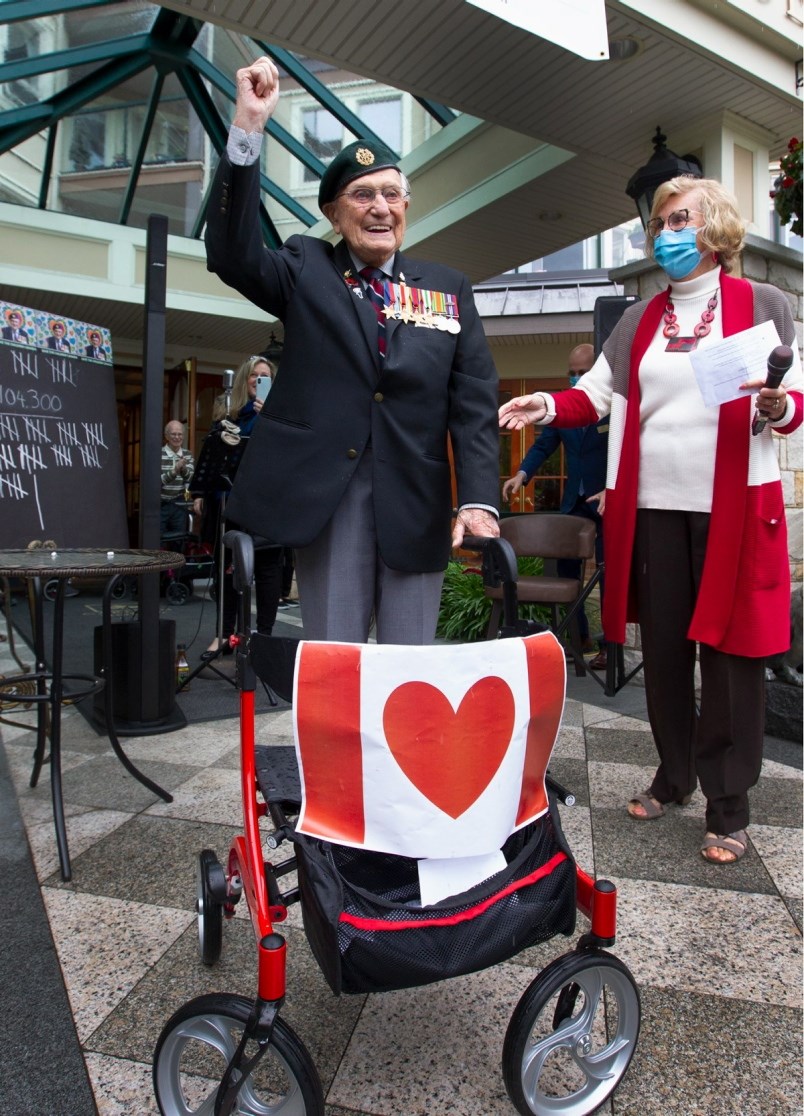 John Hillman raised his fist in triumph, smiling ear-to-ear, after walking the last of 101 laps of the courtyard of his Oak Bay retirement home on Saturday morning.

The 101-year-old walked his final six laps outside Carlton House of Oak Bay to near constant cheers from the dozens of people who came out to watch him reach his goal. The crowd erupted in cheers of “Go, John, go!” as he neared his goal, clapping loudly as he marked the final tick on his chalkboard tally.

The Second World War veteran walked an extra victory lap to thank his supporters before taking a seat and downing a drink gifted to him by another resident.

Hillman said the feeling of completing his goal was “indescribable.”

“When I came out and saw that crowd I felt as if I was in heaven,” he said.

Hillman smashed his fundraising goal of $101,000 within a few days of starting his morning laps. As of Saturday afternoon, he had raised more than $140,000 for Save the Children Canada’s emergency relief fund.

The centenarian was inspired by the story of Capt. Tom Moore, a 100-year-old Second World War veteran who raised $55 million for the U.K.’s National Health Service.

Mary Louise Meadow, a fellow resident of the home and a friend of Hillman’s, said the idea surfaced in a conversation she had with Hillman over a physically distanced coffee one morning after residents had begun isolating in their rooms for much of the day.

Hillman noticed that Moore was a bearer of the Burma Star, just like him. As someone who is always looking for ways to find meaning and serve others, that sparked an idea, Meadow said.

His daily laps have brightened the atmosphere inside the home and given everybody something positive to focus on.

“I would put John next to Bonnie Henry,” Meadow said, referring to B.C.’s provincial health officer. “They give us hope and delight. She gives us hope and John gives us delight.”

After finishing the final lap, Hillman sang along as he was serenaded by singer Stephanie Greaves, who has known him since she was a child.

He said he planned to celebrate his accomplishment with a drink and a rest.

“I’ve just had a scotch, which was quite delightful. I feel on top of the world,” he said.

He enjoyed walking his laps and the company that has gathered around him, but when 11 a.m. rolls around on Sunday, Hillman said he won’t mind taking a break.

“I shall remain in bed [Sunday] morning and I shall say: ‘I’m not going,’ ” he said with a smile.

John Hillman will be collecting donations for Save the Children until the end of the month. His fundraising page is canadahelps.org/en/pages/john-hillman-101-laps-for-101000.