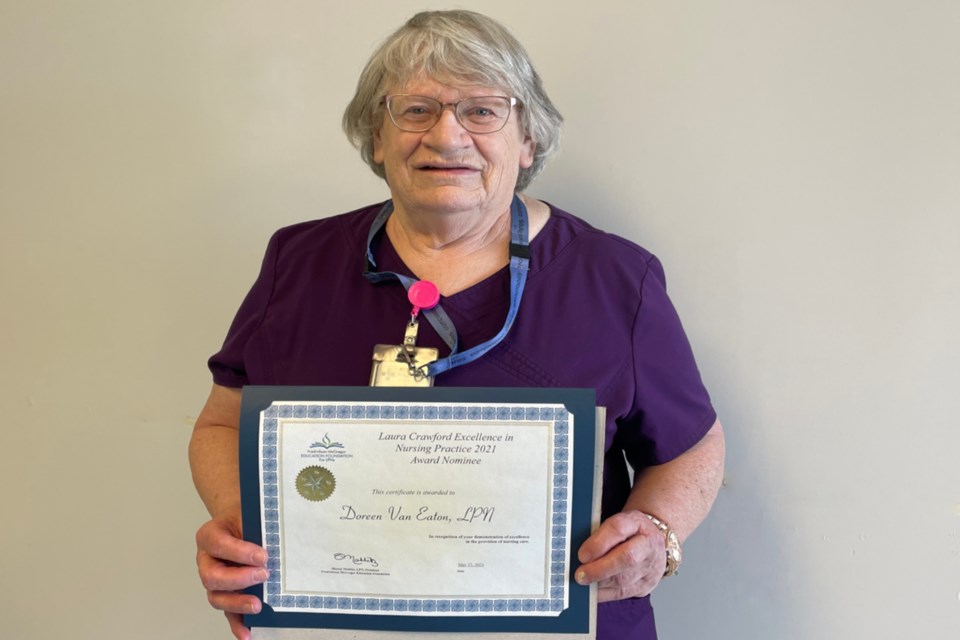 For 49 years and two months Doreen Van Eaton has been a licensed practical nurse in Athabasca and she was recently nominated by a co-worker for the Laura Crawford Excellence in Nursing Practice Award based on her exemplary nursing knowledge, skills, critical thinking, attitude and judgment as well as her ability to mentor and support her coworkers.Heather Stocking

ATHABASCA — Just shy of 50 years as a nurse in Athabasca, Doreen Van Eaton has been nominated for a very prestigious honour — the Laura Crawford Excellence in Nursing Practice Award.

Tianna St. Jean has been working with Van Eaton – who is also an emergency medical technician (EMT) as well as a licensed practical nurse (LPN) – for just over three years at the Athabasca Healthcare Centre and in that time has watched her work full time, mentor other staff, train EMTs, and care for every person she encounters.

St. Jean added Van Eaton is very organized and goes above and beyond when helping others.

“I work a position on the floor, but then when I started working emergency, she was the one who did my orientation; she printed off booklets … and told me what courses I should take.” she said. “She just knows everything.”

And if you haven’t met her at the hospital, you may have seen Van Eaton volunteering or taking her baking to elderly clients.

“I admire her so much; all she does for the community and her patients and especially for the other nurses, how much she mentors us,” said St. Jean.

She said it wasn’t hard to find two people to sponsor her nomination to the Fredrickson-McGregor Education Foundation for LPNs, a non-profit which according to their website “distributes educational grants, awards and bursaries to members of the College of Licensed Practical Nurses of Alberta (CLPNA) to enhance their nursing knowledge, skills and ability, and honour their achievements.”

The specific award Van Eaton was nominated for is the Laura Crawford Excellence in Nursing Practice which is awarded to an LPN who consistently demonstrates excellence with outstanding nursing knowledge, skills, critical thinking, attitude and judgment; demonstrates and promotes an atmosphere of teamwork by example and supports co-workers; has pride in being an LPN; advocates for clients; shows a lifelong commitment to learning and enhancing their knowledge and skills and is an excellent mentor.

“She hardly ever takes breaks,” said St. Jean. “She will just go out of her way, all the way to the end for her coworkers and for the patients – like not eat for hours just so she can make sure everybody's comfortable and cover off other staff’s breaks before she takes her own.”

She added clients will often ask for Van Eaton by name.

“The patients all the time (ask) ‘Is Doreen working? Is Doreen here?’ They're always asking for her because she’s so good,” St. Jean said.

For her part, Van Eaton was shocked by the nomination.

“I found out when this came today,” she said, adding she wasn’t sure who her nominator was, but thought it might be St. Jean.

An envelope with her name on it was placed on the nursing station and when she opened it, there was the certificate of nomination – the actual award day has not been announced by the foundation and Van Eaton has 14 fellow nominees. The winner gets $1,000 and a commemorative crystal award.

The soft-spoken Van Eaton was pleased with the nomination and laughs when told she looks too young to have been a nurse for almost 50 years.

Not one to brag about herself, as her coworkers noted, she did have some advice for people on how to get through the pandemic through which she has continued working full time from the start.

Community lifts spirits of Cochrane’s most vulnerable
Jun 11, 2021 10:30 AM
Comments