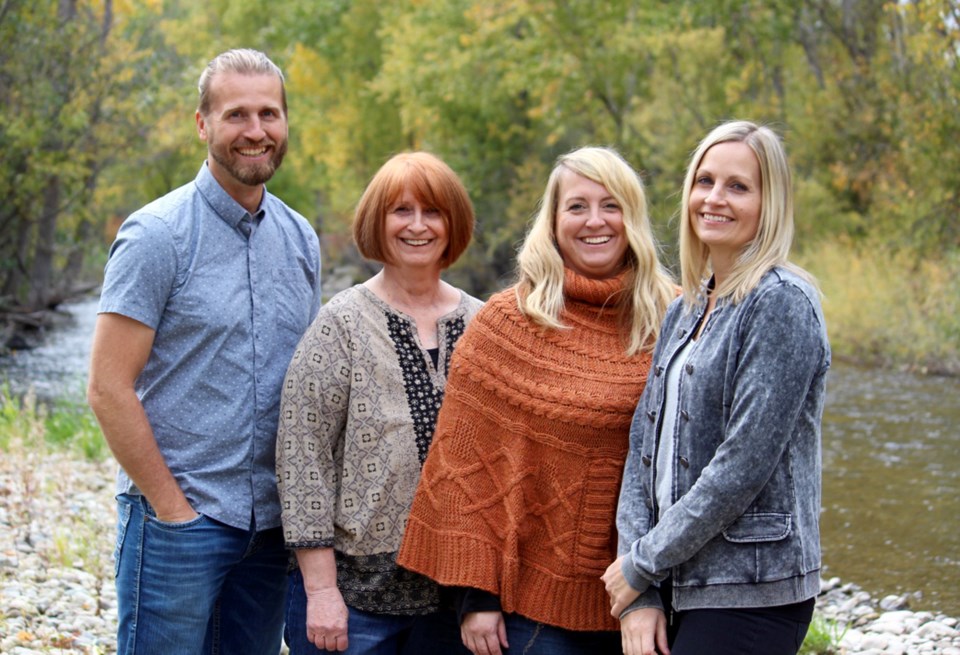 Westlock’s Lorraine Forester (second from left) with her son Cliff and daughters Lesley Schimanke and Jodi Prazak. Cancer-free since 2013, Lorraine says she’s decided to tell her story now in an effort to help other women battling the disease.

WESTLOCK – It’s been eight years since Lorraine Forester received the diagnosis that all women dread.

Now 71, she still gets choked up recalling the day back in 2013 when she was told she had breast cancer.

Lorraine, a mother of three adult children, recalled that she had gone in for her regular mammogram, albeit a little later than usual, and was quickly scheduled for a biopsy.

“It took a couple of weeks maybe, it all seemed to happen so fast,” she said. “I was scared and optimistic … both of those. I was scared … but I felt that it was going to be OK,” she recalled, her voice trailing off.

Lorraine, who was born in Westlock before her family moved away when she was in Grade 1, then moved back as an adult to raise her children, is just one of the millions of Canadian women to have been diagnosed with and has gone on to beat breast cancer — on average, 75 Canadian women are diagnosed with the disease every day.

The Canadian Cancer Society (CCS) estimates that about one in eight Canadian women will develop breast cancer during their lifetime and one in 33 will die from it — breast cancer is the most common cancer among Canadian women (excluding non-melanoma skin cancers) and is the second-leading cause of death from cancer in Canadian women. Women ages 50-74 are the group most at risk of developing the deadly disease.

Lorraine says following her diagnosis in the late summer they wanted to get her in as soon as possible, but she asked them to delay it for a few weeks as she and her son had made plans to fly out see her father-in law in Thunder Bay.

“They said yes to the delay, but I mean what option did they have,” she said with a little chuckle.

Lorraine said doctors initially recommended a lumpectomy to remove the 2.5-centimetre mass, but she decided to proceed with a double mastectomy — they had also suggested chemotherapy, which she declined. Following the surgery at the Sturgeon Community Hospital, doctors told her that they had found another tumour in her other breast, a four-millimetre lump that was a different variety of cancer than the larger one in her other breast.

“I chose to have the double mastectomy. They thought that a lumpectomy would be OK, but I thought that if it flairs up again, why would I go through all of it again? I went in on a Thursday, or a Friday and was home on the Monday. I had a doctor’s note for three weeks and went back to work after that,” she said.

Cancer-free since —the yearly checkups now are basically a short-and-sweet visual — Lorraine, who retired from a nearly 32-year career with Drayden Insurance back in 2019, says she’s decided to tell her story to help other women.

“Make sure you get your yearly mammogram, that’s very, very important,” she said pointedly.

Speaking to that advice, the Alberta Health Services Screen Test will be in Westlock April 28-30 and May 1, 3, 4 and 5. The mobile mammography trailer will be stationed at the Westlock Healthcare Centre and residents can book an appointment, or learn more about the program by calling 1-800-667-0604.

A mammogram is an X-ray of the breast and has proven to be the most effective way to detect breast cancer as early detection allows for a greater number of options for treatment and a better chance of survival — the breast cancer death rate peaked in 1986 and has been declining since, a reduction likely due to the impact of screening and improvements in treatment.

Due to COVID-19, Screen Test is taking a number of precautions to ensure the safety of its clients and staff — details will be shared when you book your appointment. More information and a complete listing of Screen Test mobile sites is available at https://screeningforlife.ca/breast/screen-test-mobile-clinics/.

“They’ve made so much progress when it comes to research and treatment,” Lorraine added.

Despite having a good support network that included her family, friends and her work family at Drayden who “were great, they couldn’t have been better,” when she was diagnosed she didn’t know anyone personally who had fought breast cancer. She was eventually able to connect with a friend of a friend of her daughter and says now that any woman who’s been diagnosed and just wants someone to talk to can get ahold of her.

“It was good to be able to talk with somebody and know what to expect after the surgery. I only talked to her that one time, but I found it so helpful and that’s partially why I’ve agreed to tell my story,” she continued.

“If anybody phoned me I’d be perfectly willing to tell them the process, what to expect and try to answer any questions they’d have. I’ve even told my doctor that if there were any other patients who’ve been diagnosed that they should feel free to give me a call.”

The Canadian Breast Cancer Network explains that breast cancer occurs when breast cells begin to grow and divide at an uncontrolled pace.

Both types of carcinoma can be in situ, or invasive. In situ means that the cancer is in its original place and has not invaded into the nearby tissues, while invasive means the cancer has spread from where it began into the surrounding healthy tissues.

Incidentally, breast cancer can also occur in men, but is considered rare — in 2020, 240 men were diagnosed and 55 died from it.

The breast cancer incidence rate in women in Canada rose between 1984 and 1991 and has fluctuated since then, with a small overall decrease. The CCS notes that in Canada, the five-year net survival rate for breast cancer in women is 88 per cent, although it varies depending on the stage of the disease. Generally, the earlier breast cancer is diagnosed and treated, the better the outcome.