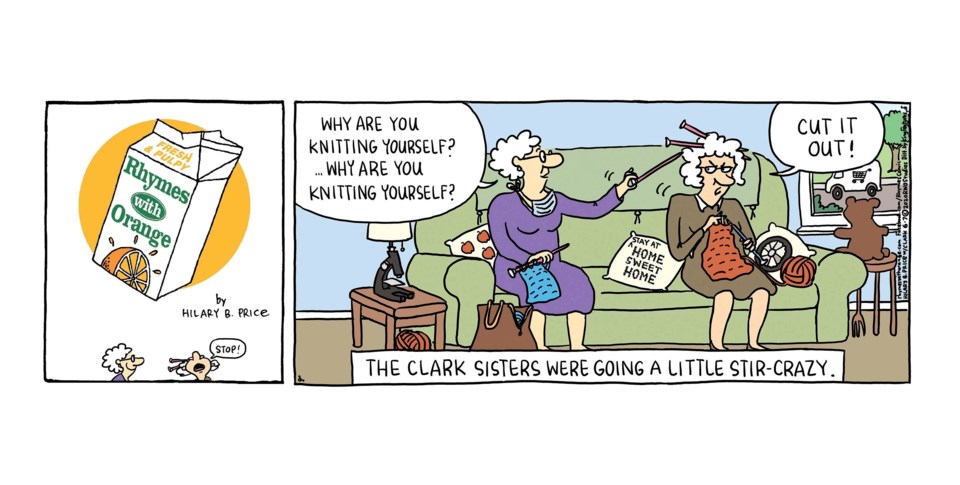 This image released by King Features shows artwork from the comic strip "Rhymes With Orange" by Hilary B. Price. More than 70 comic strips and panels will each have symbols hidden in the artwork to honor workers on the frontlines of the coronavirus pandemic. (King Features via AP)

NEW YORK — The funny papers this Sunday will have more than laughs.

More than 70 comic strips and panels — ranging from Garry Trudeau's “Doonesbury” to Jim Toomey's “Sherman’s Lagoon” and Jeff Keane's “Family Circus” — will each have six symbols hidden in the artwork to workers on the frontlines of the coronavirus pandemic.

In “Sherman's Lagoon,” the six items are hidden in the ocean's reef. In “Blondie,” they appear on the computer screen of over-worked Dagwood Bumstead. In “Zits,” they hide in Jeremy Duncan's messy bedroom.

The initiative was thought up by “Baby Blues” co-cartoonist Rick Kirkman, who wanted to show his gratitude for the helpers. He consulted his colleagues, who helped shape the idea, and it just kept growing.

“Every time somebody finds or discovers one of those little symbols in the artwork, to me, I hope that evokes a little bit of gratitude that goes out into the universe,” he said.

This Sunday would have marked the last day of the National Cartoonists Society's annual convention, which was . “I just felt like that was a great day to do it because we’re missing that big communal feeling, but at least we get to do something together,” Kirkman said.

All the participating comics, including additional art by webcomic creators and others, will be featured at ComicsKingdom.com and GoComics.com. All the cartoonists offer links to local or national charities in their social media feeds.

Jason Chatfield, who draws the “Ginger Meggs” strip and is president of the National Cartoonist Society, said that while cartoonists have banded together for causes before, nothing of this scale has been attempted.

“There’s nothing quite like sitting down and seeing all the comics together on one page and on a really special day where we’ve all to do something very special for a really good cause,” he said.

Because some strips are written and submitted weeks ahead of publication, many participating artists had to go back into already approved works to add the symbols or swap in a new strip. Kirkman credits the comic strip syndicates for rallying behind the effort and being flexible.

Kirkman left it up to the artists how to incorporate the six symbols: “I said, ’You can hide these things and just be really devious about it. You can leave them in the open. You can use them as props. You can even build your gag around them. I don’t care as long as they’re in there.”

For some strips, the task was pretty easy. For others, it required a bit more work. How exactly was “Prince Valiant” — set in the fifth century — supposed to add a microscope, which wasn't invented until the late 16th century?

One cartoonist, Wiley Miller, had to really scramble since his "Non Sequitur" panel set for Sunday takes place in the Pleistocene era. “I told him, 'Well, you know, you just hide stuff in there,'" Kirkman said. "And the next day he came back and he said, 'I did it!'”

Chatfield said some of his fellow artists came up with stylized versions of the items, like half-eaten apples or an apple pie. “Something that cartoonists love is a creative challenge,” he said.

While many cartoonists hope to keep their work escapist and so have avoided dealing directly with the coronavirus, Kirkman and Chatfield have gradually incorporated elements of the pandemic into their daily strips.

Kirkman and “Baby Blues” co-creator Jerry Scott had some characters wear face masks when coming from outside, and Chatfield's sports-loving hero is now being schooled at home.

The cartoonists are looking forward to Sunday, when a community they say can be a little introverted and isolated offers its communal artistic gratitude — and a scavenger hunt for readers.

“I’m going to be as pleasantly surprised, I think, as everybody else to see all of this,” said Kirkman. “And I hope this news makes it to the people who deserve all of this gratitude.”

Mark Kennedy is at http://twitter.com/KennedyTwits

Inuit performer aims to become first Indigenous woman on Maxim cover
Jul 8, 2020 2:45 PM
Comments
We welcome your feedback and encourage you to share your thoughts. We ask that you be respectful of others and their points of view, refrain from personal attacks and stay on topic. To learn about our commenting policies and how we moderate, please read our Community Guidelines.