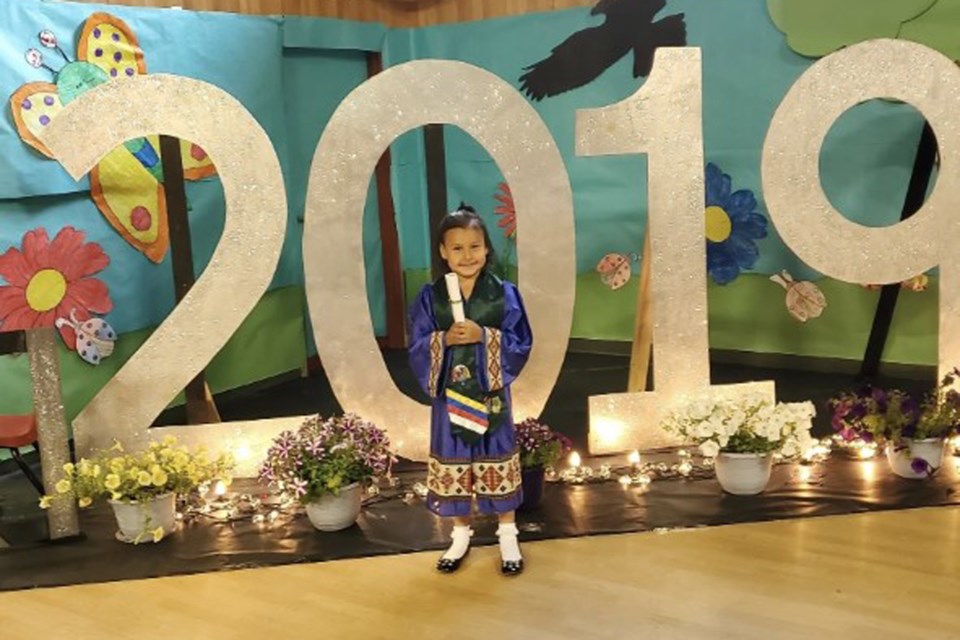 Kelsey Waskahat, 7, was surprised with Christmas in September by her family after she was diagnosed with Diffuse Intrinsic Pontine Gliomas (DIPG), a disease that causes tumours at the base of the brain. Photo submitted.

After Kelsey Waskahat, 7, was diagnosed with Diffuse Intrinsic Pontine Gliomas (DIPG), a disease that causes tumours at the base of the brain, her family came together with the help of the local community to give her a holiday surprise she won’t soon forget.

On Sept. 4, Kelsey’s dad Jarrett Waskahat noticed that she was acting confused and wasn’t able to speak properly.

The family took her to a couple of clinics before making the drive from Frog Lake First Nations to the Lloydminster hospital where they were told Kelsey had a brain tumour. She was airlifted to Saskatoon, where an MRI and CT scan were completed at the hospital revealing that Kelsey had DIPG.

“They said that it was growing too fast and if they touched it, she wouldn’t wake up,” recalled Morningstar Roy, Jarrett’s sister.

Jarrett’s family sat down for a meeting with the doctors to get a better picture of what DIPG is and were told that it’s inoperable.

“There’s nothing they can tell right now as to how it starts or how it originates, the only thing that they know is the alteration in her DNA while she was growing altered it," Grant Roy, Morningstar’s husband, explained. "We were told they couldn’t do anything because it caused her brain stem to grow and grow, which caused a whole bunch of bad stuff. They weren’t able to do surgery because they can’t tell what was normal brain stem and what was the tumour.”

Jarrett and Amber Whitstone, Kelsey’s mom, had to choose one of two options for their daughter: keep Kelsey in the hospital for radiation that could extend her life for maybe a year but would make her sicker and sicker, or make the most of the time they had left with her.

It was Kelsey’s grandfather who suggested the family host a holiday celebration and Morningstar got the ball rolling because there’s no telling how long the family has left with her niece.

“Christmas in our family is the most important thing ever,” she said. “We love Christmas, we love how we get together, that we can laugh and it’s just one of the best things that we have.”

A GoFundMe page called "Early Christmas for Kelsey" was set up and over $10,000 was raised within five days.

“The idea took off so fast because we had a lot of people helping to get it done,” Morningstar said. “There’s so many donations that are coming in and it’s been an amazing response from everyone.”

The family came together to surprise Kelsey on Sept. 12 with Christmas in September, which included a visit from Santa Claus, bouncy castles, cotton candy machines, a cake, and presents.

“It wasn’t us saying goodbye, it was a celebration of her life,” Morningstar stated. “It’s her celebration to be a kid and it’s her saying ‘you know what? I’m having Christmas in the middle of September.’”

Morningstar said the family was overwhelmed with the amount of support they received.

“It took just one day for people to ask what we needed, how they could help, that they wanted to be part of her event. It’s just amazing how everyone reacted to hearing her story.”

St. Albert breadmaker fuels sourdough craze
Sep 24, 2020 1:45 PM
Comments
We welcome your feedback and encourage you to share your thoughts. We ask that you be respectful of others and their points of view, refrain from personal attacks and stay on topic. To learn about our commenting policies and how we moderate, please read our Community Guidelines.