The 14-track collection weaves together songs with storytelling interludes
Nov 14, 2020 10:45 AM By: Canadian Press 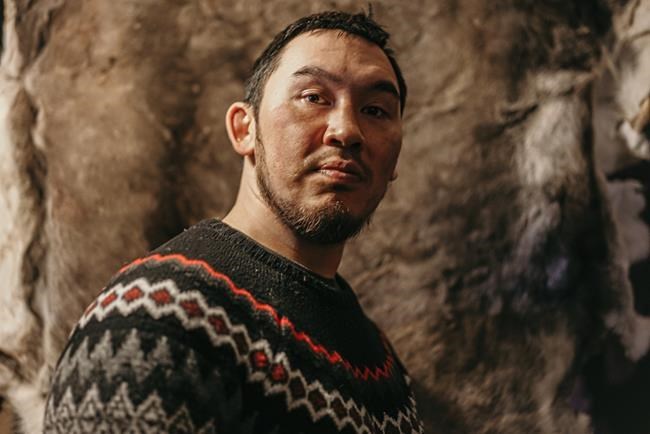 Singer-songwriter Terry Uyarak from Igloolik, Nunavut, is shown in a handout photo. His debut album is called "Nunarjua Isulinginniani," or "Before the World Ends." THE CANADIAN PRESS/HO-Jennifer Lane

Whether sledding with his dog team across the frozen ocean north of the Arctic Circle or driving his snowmobile over a land in darkness, the self-taught singer-songwriter says he's "always thinking about music."

"I hear music everywhere," a soft-spoken Uyarak said in a phone interview from his home in Igloolik, Nunavut, off northern Baffin Island, about 2,700 kilometres north of Montreal.

It was only last year that Uyarak's friends finally persuaded him to share that music beyond his snowmobile and dog sled.

His debut collection called "Nunarjua Isulinginniani," or "Before the World Ends," came out Oct. 30 and is available on all music-streaming platforms.

"I thought maybe I could try. Even if it's not that good, I'll still have an album to tell my children about one day, to inspire them that they can do anything if they choose to. That's when I really started writing," Uyarak said.

The 14-track collection weaves together songs with storytelling interludes by Igoolik elder Simon Qamaniq. It also mixes Uyarak's acoustic guitar melodies with his own recordings of sounds, including his dog team howling and winter winds sweeping across the tundra.

The songs, which are entirely in Inuktitut, also feature Becky Han, Celina Kalluk and Riit, all Nunavut artists.

Uyarak did his recording at Aakuluk Music's Iqaluit studio, a refurbished garage insulated on the inside with caribou, muskox, seal and polar bear skins for soundproofing.

He said the title is a reference to "the sensitive time" Nunavut faces during the pandemic, but is also a reflection of his own dreams.

"It feels like we are right on the edge. At the same time ... if I can make a CD before I die or before the world ends, I can at least inspire someone."

The collection is also meant as a message to young Inuit to remember where they came from, Uyarak said.

"[Inuit] went through so much change with our parents and our grandparents, especially with being completely nomadic to our lifestyle now. If I could send a message to people, it would be that we go back a bit to our roots and tell each other that we can overcome any situation.

"Today, more than ever, we need to share our love with each other."

Uyarak said he is digging into his own family history and spent "countless hours" learning stories from his late grandmother.

"I'm super Inuk, living in the modern era. I have always been proud of our ancestors, how they lived a very extreme lifestyle, but took the time to laugh at night when they settled after long hours of hunting."

Uyarak said there was a point where he stopped playing music altogether. In 2012, he lost his best friend Solomon Uyarasuk, who hanged himself while in custody in an RCMP cell. Uyarasuk had introduced Uyarak to guitar.

"I didn't have any more motivation to play. I ended up getting back to it when my friends kept pushing me. I'm relearning again, I guess."

The song "Anuri," featuring Riit, was written by Uyarasuk and Uyarak dedicates it to him.

"We got through happy times and hard times and loving times. They're all necessary for life."

This report by The Canadian Press was first published Nov. 13, 2020.

Cochrane's Syrian refugees adapting well four years after arrival
Nov 27, 2020 10:45 AM
Comments
We welcome your feedback and encourage you to share your thoughts. We ask that you be respectful of others and their points of view, refrain from personal attacks and stay on topic. To learn about our commenting policies and how we moderate, please read our Community Guidelines.