Residents pull together a birthday for Mikayla and Hunter Vanderkracht they will never forget
Apr 16, 2020 6:00 AM By: Hannah Lawson 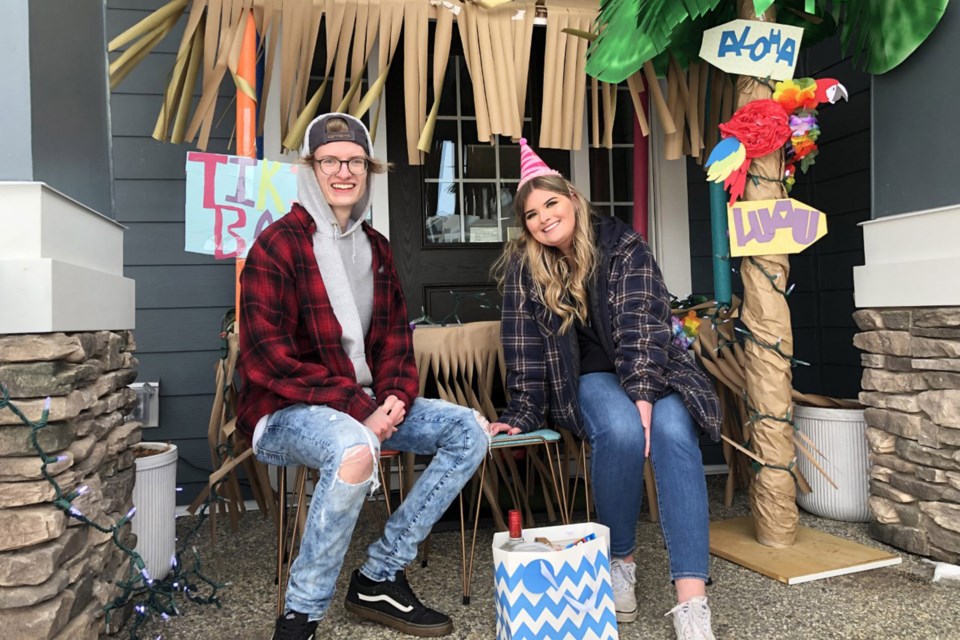 The Jensen Lakes community came together to throw 18th birthday celebrations for twins Mikayla and Hunter Vanderkracht April 7. A social media post spurred a pub crawl to 31 houses, in which people left bottles of booze outside their doors, along with other treats for the twins.

Celebrating their landmark 18th birthday turned out much differently than hopping from one beer-spattered bar to another along Whyte Avenue, but Mikayla and Hunter Vanderkracht say their big day turned into a community celebration unlike any other.

The Jensen Lakes twins had been planning the big day for months, with Mikayla minutely detailing her birthday outfit and makeup. But COVID-19 made any plans to go out impossible.

Instead, a social media post by a stranger down the street spurred an “incredible” physically distant community pub crawl April 7.

“It just felt like trick or treating,” Mikayla said. “It was Halloween, but with booze.”

“People actually put their heart into it. You could tell, people tried,” Hunter said. “We just think it was really awesome and really, really kind of people to do that for us.”

After an hour of booze trick-or-treating with their dad driving, the twins hit up almost every street in Jensen Lakes, stopping at 31 houses to collect tiny bottles of hard liquor, beer, cake and even a bottle of Advil. One house went to all the trouble of meticulously crafting a porch-front Tiki bar for the twins to enjoy a drink at.

The twins’ mother Michelle Vanderkracht said she was speechless in response to the lengths her neighbours went to to make her children’s day so special.

“They couldn't wipe the smiles off their faces,” she said. “In the end, they basically said, 'This is probably the best 18th birthday party we could have had.'”

Being fairly new to Jensen Lakes, Michelle said she has not really had a chance to get to know people living in the neighbourhood, aside from the houses immediately adjacent to hers. But the neighbourhood pub crawl has taught her the importance of slowing down and taking the time to get to know your neighbours, who are there for you whether you realize it or not.

“You don't have to be such a stick-in-the-mud, you know, pull into your garage and close the garage door. Before you turn your vehicle off, take the time and go out and say hi,” Michelle said.

The idea for the twins’ pub crawl came out of a community birthday calendar organized on social media. Christine Hoskins compiled a list of kids’ birthdays in the area, and will send out a reminder the day before for area residents to put signs in their windows and leave gifts outside if they want to participate.

So far, there are 13 birthdays to celebrate in April.

When Bobi-Jo Dowling saw it was an 18th birthday for twins coming up, she wanted to organize the community to do something extra special. She said it was “incredible” how many people came together for the twins, once she put the suggestion out there.

“It's just really nice to see that everyone came together. I think once this is all done, I think it will have just brought us all closer together as a group of neighbours,” Dowling said.