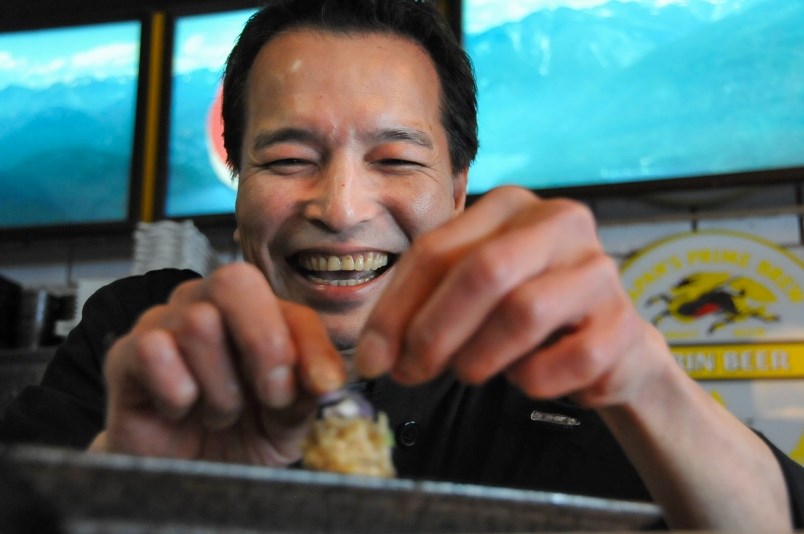 PORT COQUITILAM, B.C. — Keith Kamizato lives for two things in this world: sushi and hardcore heavy metal. So when he finally struck out on his own nine years ago to launch a restaurant, Sushi K Kamizato, the former bass player and sushi master built the Port Coquitlam haunt into a veritable shrine to both the thick sound of metal and traditional Japanese cuisine.

Unlike your average sushi restaurant, you won’t find the bento boxes, chicken teriyaki and California rolls adapted to the tastes of Metro Vancouverites; Kamizato’s style closely dovetails with the roots of Japanese sushi tradition.

“We’re not a typical Japanese restaurant,” said Kamizato. “You go to Tokyo and try the sushi [there], it’s the exact same experience you can have here in PoCo ... I make it in front of you and you try it piece by piece.”

The restaurant, run by Kamizato and his wife, has drawn a loyal following over the years, with a base of regulars coming from as far as the United States and Toronto, but also closer to home, with sushi enthusiasts coming from the Tri-Cities and neighbouring municipalities like Richmond, Surrey and Vancouver.

Inside the 22-seat restaurant, the walls are lined with bass and electric guitars, Iron Maiden posters and a wall-sized photo collage preserving the fuzzy memories of long-ago-catered Bon Jovi and Metallica concerts. The distorted guitar and blunt vocals of "Master of Puppets" scream over an otherwise quiet kitchen. From the corner, Kamizato whips out a Juno trophy for Heavy Metal Album of the Year, bestowed to his childhood friends from the Devin Townsend Project in 2015 (what’s left of the band still comes and jams at the restaurant from time to time).

Things couldn’t have been going better.

Then COVID-19 hit, and like the rest of the restaurant industry, the Kamizato’s were forced to adapt.

“It really freaked me out,” he said.

“But what can we do? It’s the way it is. My biggest concern now is to survive, just to stay afloat.”

The Kamizato’s quickly shut the front door, only opening for take-out until June 1, when they plan to re-launch dine-in, reservation-only seating at less than half capacity.

As someone who always strives for perfection and authenticity, the sushi chef has a hard time letting his style of cooking bend to the realities of COVID-19, and he can’t help but implore take-out diners to eat their orders fresh, the minute they step back on the sidewalk outside his door.

In the kitchen, the frequency and size of shipments from Japan have dropped, and, in recent months, he’s leaned more heavily on local staples like wild sockeye salmon, albacore tuna, sea urchin and spot prawns regularly sourced from local fishers.

Kamizato said he’s always got one foot in two worlds, whether it’s combining sushi and heavy metal, or comparing the spread of COVID-19 in Japan and B.C. Like many British Columbians, he found himself turning into a news junky over recent months, every day tuning in to provincial health officer Dr. Bonnie Henry’s daily press conferences.

“Everybody is so scared but Dr. Bonnie is always telling us what to do. She’s so soft spoken. A lot of people listen,” he said. “It makes me really feel safe.”

He doesn't appear to be alone. In March, Henry's guidance led to the launch of Dr. Bonnie Henry fan clubs, and in April, she had shoe muse added to her list of accolades.

Now, in an attempt to capture in sushi the soft-spoken style the top doctor brings to the lectern, Kamizato has created what he calls the “Dr. Bonnie.”

It begins with a knob of rice cupped in a slivered nest of butterfish. From the height of the sushi bar, Kamizato sears the mild-tasting fish with a blowtorch, before topping it with a secret medley of seafood and crunchy shallots.

Delicately served on a green sesame leaf, the teetering ode to the provincial health officer is finished with a light drizzle of hazel-brown secret sauce and garnished with an edible Japanese flower Kamizato calls “Dr. Bonnie’s mask.”

“The taste is very light. So as long as you don’t have a seafood allergy, you should like it,” he said with a chuckle, adding that he’s collecting the proceeds from the “Dr. Bonnie” for charity.

And while Kamizato hopes Henry will come to try her namesake dish one day, like the rest of his customers, the metalhead sushi chef warns music is not optional.

“‘You don’t like hardcore metal? Too bad. That’s your problem,’” said Kamizato with another one of those laughs.