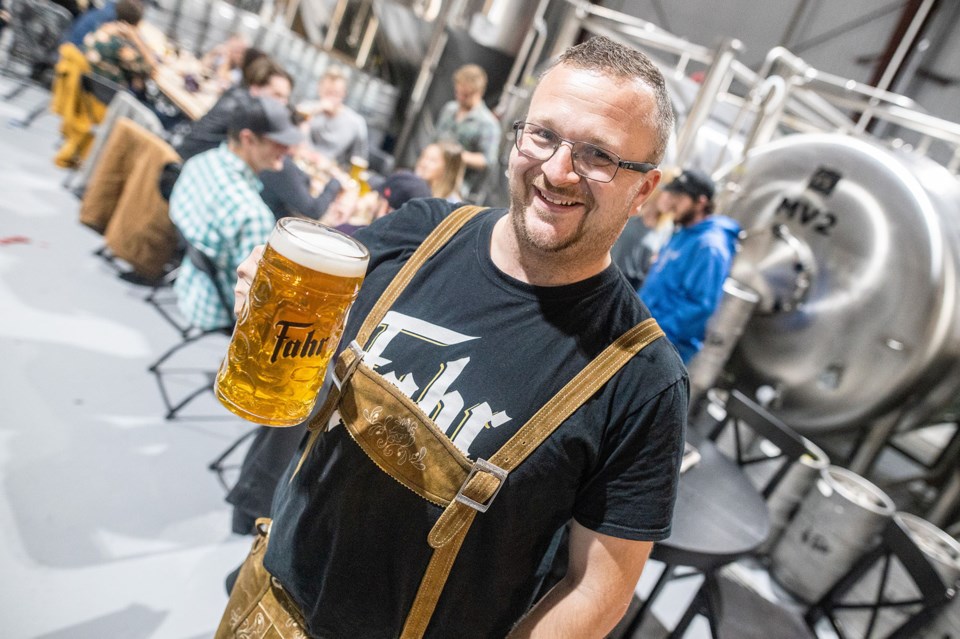 Turner Valley brewmaster Jochen Fahr totes a stein of his beer at a celebration of his breweryâs second year running on Oct. 5. (BRENT CALVER/Western Wheel)

Centuries-old breweries in Europe had nothing on Turner Valley’s three-year-old micro-brewery after its hefeweizen beat out the rest in an international beer competition.

Brauerei Fahr earned the Best Bavarian-Style Hefeweisse title for its prize Fahr Hefe in the 2020 World Beer Awards, beating out a wide selection of classic and world famous German hefeweizens in a category often dominated by German breweries.

“The Canadian entries are blind tested and then the winners of each country get sent to London, U.K. to be blind tested again,” said Brauerei Fahr proprietor Jochen Fahr. “There is absolutely no bias anywhere and nobody knows what samples they’re tasting and where they are coming from so for us to beat out all of those thousands-year-old German breweries and we have been three years in operation in Turner Valley, that’s huge.”

Fahr’s Bavarian Style Hefeweiss, Classic Pils and Vienna-style copper lager each received the title of Country Winner at the national level, and his Alkoholfrei placed silver in Best in Class for non-alcoholic beers.

“Last year we got gold at the national level of the competition with the Hefe winning best in Canada in the Bavarian-style Hefeweiss category and Fahr Pils silver in the Classic Pilsner category,” he said. “This year we entered more beers, but also the beers that we entered all scored higher this year than last year.”

Fahr is awaiting the result of the Canadian Brewing Awards, which will be announced tomorrow.

“We expect to have a bunch more awards coming from that,” he said. “It’s quite a year we’re having.”

Banff installs Pride pathway, Canmore delays crosswalk to 2020
Sep 21, 2020 11:30 PM
Comments
We welcome your feedback and encourage you to share your thoughts. We ask that you be respectful of others and their points of view, refrain from personal attacks and stay on topic. To learn about our commenting policies and how we moderate, please read our Community Guidelines.