Video project started in California as a way to relieve its creator's anxiety during the COVID-19 pandemic
Jun 1, 2020 10:15 AM By: Glacier Media 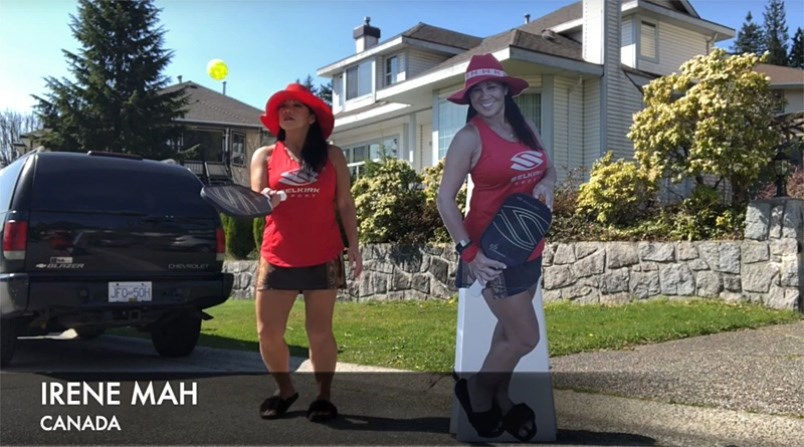 Port Moody, B.C.'s Irene Mah helped "propel" a pickleball on a journey around the world in a YouTube video project that included a stop in Antarctica. SCREENSHOT/YOUTUBE

Baseball’s Bobby Thomson famously hit the “shot heard around the world” to help his Brooklyn Dodgers win the National League pennant in 1951.

But a Port Moody woman recently hit a pickleball that really did travel around the world.

Irene Mah, who started playing the sport in 2015 and is now an instructor certified by the International Pickleball Teaching Professional Association, is part of a video project compiled by Ernie Medina Jr., of Loma Linda, Calif., that launched a perforated plastic ball on a journey across seven continents and more than 100,000 kms.

Or at least it looked that way when Medina edited together all the clips he received from pickleballers from around the globe relaying a ball off-camera, including one intrepid couple that had brought their paddles to Antarctica.

Port Moody’s Mah helped “propel” the ball from Alaska to a friend and fellow competitor in Beaverton, Ore.

"That was very cool to see her receive the ball," Mah said. "The pickleball family is huge."

Medina, a professor at the Loma Linda University School of Public Health, said the month-long effort was part passion project and part coping mechanism to ease his own anxieties over the COVID-19 public health crisis.

He said creating “a sense of community is a major source of stress management,” and his video is “a way to highlight this family of pickleballers globally.”

Medina, an official ambassador for USA Pickleball and the International Federation of Pickleball, said he reached out to friends he’s made since he started playing the sport in 2016, as well as posted messages to various Pickleball groups on Facebook, including the Pickleball Forum that has more than 32,000 members. He said finding players in Africa was the most challenging.

“Not that many pickleballers there.”

Pickleball is a racquet sport that combines elements of tennis, badminton and table tennis using hard wooden paddles and a plastic ball perforated with holes not unlike a whiffleball. It’s played on a court that looks like a compacted version of a tennis court.

Medina said while pickleball is normally associated with seniors, younger players are beginning to discover the sport, an aspect he was proud to capture in his video compilation.

“it’s catching on fast,” he said, adding he’s even taught the game to kids.

Though Medina’s project was a fun diversion from the current pandemic, he said it also has a serious message about the importance of staying active, especially during a time of crisis.

“While people are passionate and addicted about promoting pickleball because it’s fun and a great sport, I’m one who does it because I believe it’s one of the best public health interventions to get communities more active,” he said.

Mah said she's thrilled to be a part of the final video. She added her participation has also renewed her wish to get a dedicated pickleball court somewhere in the Tri-Cities.

"I need to travel to our surrounding cities in order for me to play pickleball," she said.

Read more from the Tri-City News