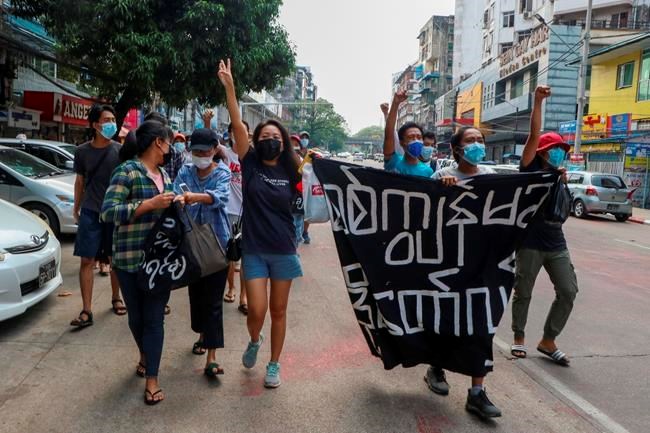 TOKYO — Japan's government said Monday it is asking Myanmar to release a Japanese journalist who was arrested by security forces in its largest city of Yangon the previous day.

Chief Cabinet Secretary Katsunobu Kato told reporters that his government is asking Myanmar authorities to explain the arrest and release him as soon as possible.

He did not identify the detainee, but Japanese media said he is Yuki Kitazumi, a former Nikkei business newspaper reporter currently based in Yangon as a freelance journalist.

Myanmar state television stations Myawaddy TV and MRTV on Monday night confirmed that the arrested journalist is Kitazumi, and said he had been arrested on a charge of violating Section 505(A) of the Penal Code. The section prohibits comments that “cause fear,” spread “false news, (or) agitates directly or indirectly a criminal against a Government employee."

Dozens of other journalists are being held on the same charge, which is punishable by up to three years in prison.

“We will continue asking the Myanmar side for his early release, while doing our utmost for the protection of Japanese citizens in that country,” Kato said.

Japan's Foreign Ministry later said the journalist was arrested at his home on Sunday night and is being detained at Yangon's Insein Prison, where political prisoners are frequently held. It said Japanese Embassy officials have not been given access to him.

Kitazumi has posted reports and views about developments in Myanmar on Facebook. Hours before his arrest, he posted a video showing Myanmar citizens gathering at a Tokyo temple to pay tribute to people killed in the Myanmar military junta's crackdown on protests against its Feb. 1 seizure of power from an elected government.

Kitazumi was detained briefly by police in late February while covering pro-democracy protests in Myanmar.

Japan has stepped up its criticism of the military government's deadly crackdown on opposition but has taken a milder approach than the United States and some other countries that imposed sanctions against members of the junta.

On Saturday, the junta released more than 23,000 prisoners to mark the traditional new year's holiday. At least three had been political prisoners, but it wasn't immediately clear if any activists detained during the post-coup crackdown were freed.

According to the Assistance Association for Political Prisoners, which monitors casualties and arrests, government forces have killed at least 737 protesters and bystanders since the takeover. The group says 3,229 people, including ousted civilian leader Aung San Suu Kyi, are in detention.

Bank of England maintains rates, boosts growth expectations
May 6, 2021 5:52 AM