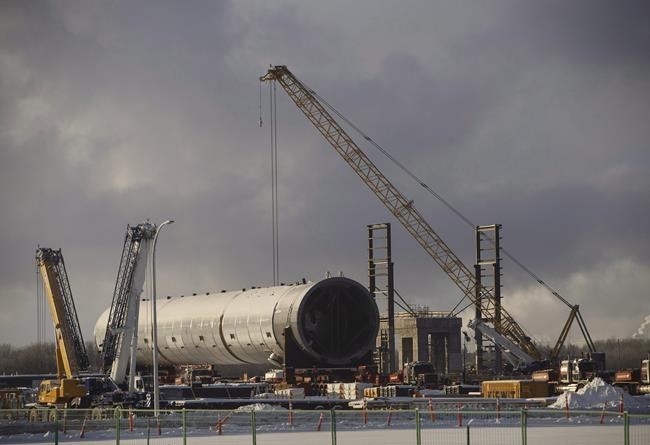 CALGARY — A formalized takeover bid for Inter Pipeline Ltd. that matches an informal offer made about two weeks ago suggests that Brookfield Infrastructure Partners L.P. doesn't expect a white knight to drive up the price, an analyst said Tuesday.

On Monday after markets closed, Brookfield said its $16.50 per share offer to buy stock in Inter Pipeline it doesn't already own had been filed with Canadian securities regulators.

In a news release late Monday, the Calgary-based company asked investors to take no action, reminding them that it has launched a review process that could include a corporate sale.

"Given the takeover circular being offered at the original offer price, (Brookfield) is showing confidence that a white knight opportunity may be unlikely," said analyst Nate Heywood of ATB Capital Markets in a report.

"However, this does not mean a competing bid does not exist ... Though this formal bid is the first step towards a corporate transaction, there are likely many developments to come as the process is in early stages."

Analysts with Tudor Pickering Holt &amp; Co. said in a note to investors that they expect a "sweetener" will be required to persuade Inter Pipeline investors to tender their shares.

Inter Pipeline said its board has 15 days to provide a recommendation on the bid.

Brookfield is offering $16.50 per share in cash or 0.206 of a Brookfield Infrastructure Corp. class A exchangeable share, with the maximum cash available set at $4.9 billion. The offer, which expires on June 7, implies a value for Inter Pipeline of $7.1 billion.

Brookfield has said it previously discussed prices with Inter Pipeline "in the range of $17 to $18.25'' per share but would need to study its books to "substantiate'' the growth potential and commercialization objectives for its $4-billion Heartland Petrochemical Complex before increasing its offer.

Last week, Inter Pipeline CEO Christian Bayle said the company would release details on Heartland's contracts and earnings potential before its first quarter 2021 reporting date. The facility under construction northeast of Edmonton is expected to be placed in service in 2022.

He said profitability prospects of the project designed to convert propane into polypropylene plastic pellets for export to manufacturers have improved, making it more attractive to potential customers and partners.

"Inter Pipeline is a high-quality energy infrastructure business with a diversified asset portfolio that generates long-term predictable cash flows, all of which understandably make it attractive,” Margaret McKenzie, chair of the board committee conducting Inter Pipeline's review, said Tuesday.

“It is the board’s duty to not only review this offer, but to pursue all available opportunities to unlock maximum value for our shareholders.”

Inter Pipeline said it is continuing to seek a partner for the Heartland complex. It said late last year it expected to conclude that process in the first half of 2021.

Last spring, due in part to effects of the COVID-19 pandemic, Inter hiked the expected cost of the complex by $500 million from the original $3.5 billion.

About $3.2 billion had been spent on the Heartland project as of the end of 2020, Inter reported.

This report by The Canadian Press was first published Feb. 23, 2021.

Note to readers: This is a corrected story. An earlier version gave the wrong timing for Inter Pipeline's news release and misstated the amount spent on the Heartland project in the final paragraph.