On the rise: Flour demand higher as Canadians turn to baking as welcome respite 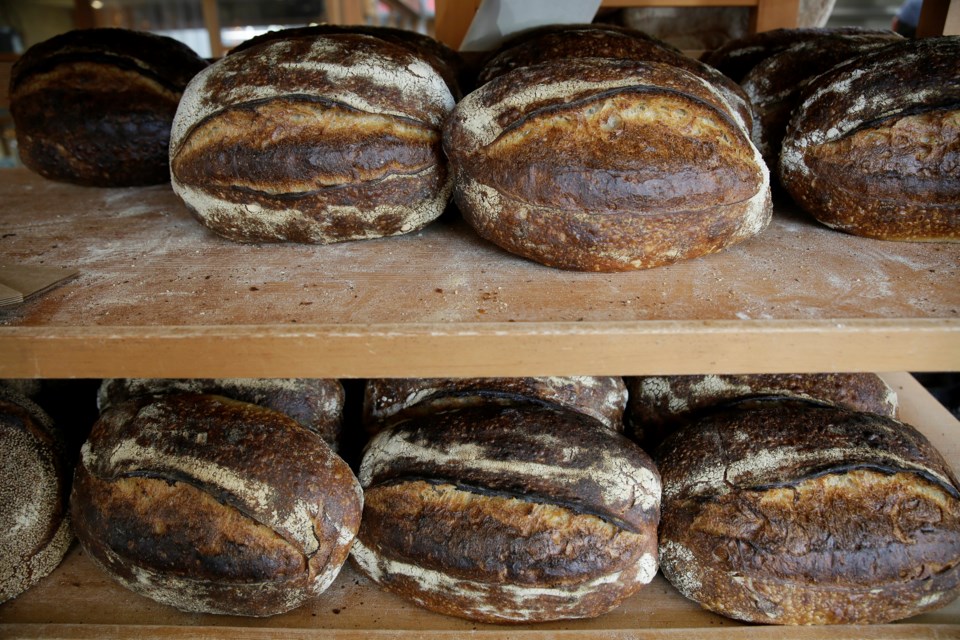 Freshly baked loaves of bread on a rack at the Tartine Manufactory in San Francisco on Friday, Aug. 11, 2017. The time-honoured tradition of baking has become a welcome respite from the stressors of the outside world. THE CANADIAN PRESS/AP, Eric Risberg

Steve Butt went all-in for his first baking effort in the COVID-19 era — a showstopping Baked Alaska, complete with homemade ice cream. Now he's exploring a variety of recipes as he takes advantage of more at-home time during the pandemic.

It has become a familiar theme for many Canadians as they stay home to help flatten the curve. The time-honoured tradition of baking has become a welcome respite from the stressors of the outside world.

"I think it offers a sense of control in a situation that you can't necessarily control," Butt said.

The Toronto-based police officer recently created his own version of the multi-layered cake for his girlfriend's birthday, going the extra mile over the three-day effort.

He baked banana bread, made his own ice cream flavoured after Dutch cookies called 'speculaas,' whipped up some meringue and froze the creation before a quick blast in the oven prior to serving.

"It actually turned out amazing for the first shot at it," he said with a laugh.

The baking trend has enjoyed a rise on social media over the last month as bakers show off their wares with Instagram posts and connect with others via Facebook community groups.

Twitter Canada had a 71 per cent increase in Canadian conversation about "baked goods and desserts" in the second half of March compared to the first half of the month, communications head Cam Gordon said in an email.

The baking uptick even led to concerns about the potential for a flour shortage and worries about toilet-paper-like panic buying.

Simon Somogyi, a University of Guelph associate professor and researcher in agri-food value chains, food business and international market development, said that shouldn't be an issue.

He said while there may have been short-term shortages at some stores, flour is considered a "shelf-stable product" so there's no need to race out to get it.

Gordon Harrison, the president of the Canadian National Millers Association, said the recent surge in retail flour demand has exceeded levels usually seen in the traditional peak season from late August through Christmas.

However, he noted Canada has an "abundant supply" of milling-quality wheat, oats and other products, and his members are working hard to meet the demand.

"There is no real need to go out and buy 10 bags of flour and we have no indication that there'll be a shortage either in the near term or longer term," he said from Ottawa. "The milling industry is running well nationally."

Mark Hayhoe, the owner of k2 Milling in Beeton, Ont., estimates his artisanal mill has produced five times as much home baking flour as normal over the last few weeks.

"Baking is a psychologically positive endeavour," Hayhoe said. "People are rediscovering I think the simplicity of life. That's why wheat, flour and bread is considered the staff of life."

While some people enjoy the simple processes of baking, others use it as an outlet to help cope with heightened anxiety in these challenging times.

Leslie Kiszka, a self-taught baker from Hull, Mass., created a stress baking website and blog some five years ago that includes recipes, baking basics and photos.

"Now it's getting a lot of traffic because everybody is looking for ways to relieve their own stress," she said. "And apparently the rest of the world agrees that baking is a good way to do it."

And of course if the pleasing aroma doesn't get you hooked, the end result most likely will.

Kristie Nairn, a Toronto-based marketing director, said she was a semi-regular baker before the pandemic. Now she's in the kitchen almost daily making cookies, brioche, bread and tortilla shells.

"There's nothing quite like the first time you make a loaf of bread," she said. "It's out of the oven and you can't believe how good it is and you wonder why you ever buy bread at the store. It's having an end result that you can just enjoy.

"You don't have to leave the house for it. There's something very satisfying about accomplishing something that simple."

This report by The Canadian Press was first published on April 4, 2020.