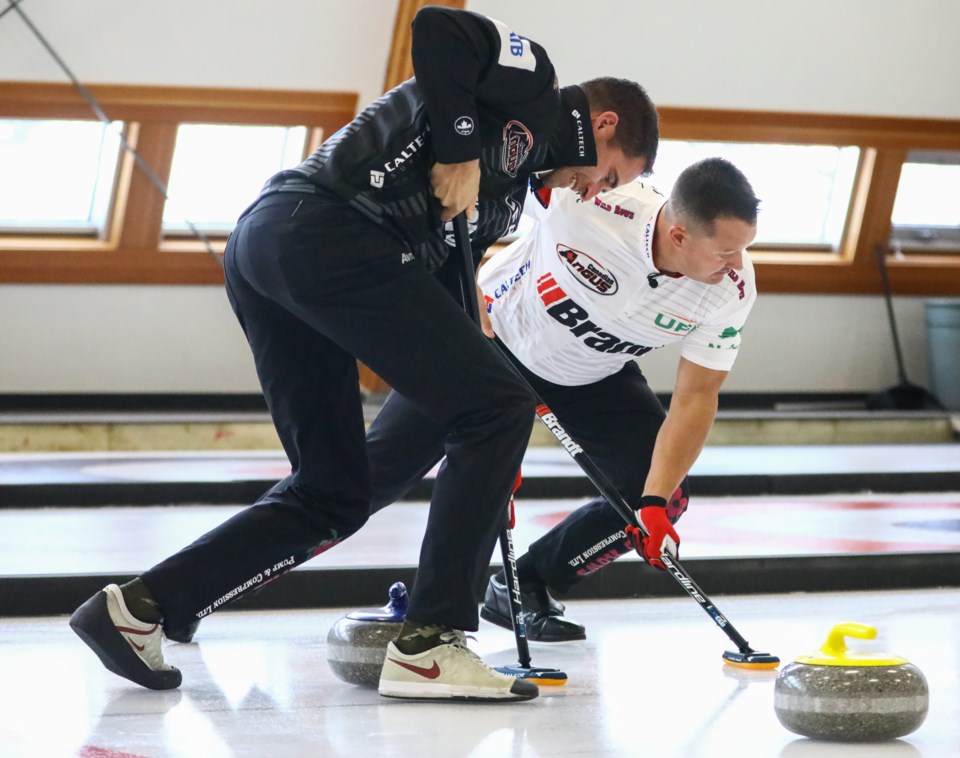 John Morris and Ben Hebert, with Team Koe, sweep the rock into the house in the third end during the final match of the ATB Banff Classic at the Fenlands Banff Recreation Centre in October, 2019. Team Harty defeated Team Koe 8-4. EVAN BUHLER RMO PHOTO

CANMORE – Canmore’s John Morris isn't sweating that his squad wasn’t picked as Curling Alberta’s provincial rep at the 2021 Tim Hortons Brier, as he will still have a shot at winning “one of the hardest Brier’s ever” as a wild card.

Earlier this week, Curling Alberta named Team Brendan Bottcher as its representative for the Canadian men’s championships in March after pandemic circumstances forced the governing body to pick a team – rather than let them play for a chance to wear wild rose colours.

“Both teams [Team Bottcher and Team Kevin Koe] had good arguments to get in,” said Morris, “but in all honesty, whether you’re wearing Alberta colours on your back, or as a wild card, it doesn’t matter how you get in the Brier, it’s just about making sure you get there and having a chance to win is the most important thing.”

Whatever uniform we'll be wearing we're motivated and excited to go compete for another Canadian championship and represent all our sponsors and fans at the Brier as Team Koe. See you in March from the Calgary bubble! pic.twitter.com/hPoqAVM8Oj

Team Bottcher, ranked fourth in the country, was last year’s provincial champ, and runner-up at the 2020 Brier.

On making the decision, Curling Alberta considered a full range of options.

“This was an extremely difficult decision for Curling Alberta’s board of directors,” said Steven Young, president of Curling Alberta and Banff Curling Club in a press release.

“As a province, we were faced with a unique set of circumstances in unprecedented times. No one could predict that we would be forced to make a decision like this, which we tried to avoid by pushing hard to host our championships."

This year’s Brier is being held in a bubble at the Markin MacPhail Centre at WinSport’s Canada Olympic Park in Calgary between March 6-14.

Instead of a usual 16-team bracket, the stakes have been upped in 2021, as 18 teams will take to the ice in a special exception.

Although, the other favourite to win it all from Alberta is Team Koe – Kevin Koe, B.J. Neufeld, Ben Hebert and Morris – who formed as a team in March 2020. After getting in some regional competition this season, they are currently ranked sixth in the country.

“On paper, this will be one of the hardest Brier’s ever to win because usually you don’t have two extra really good Canadian teams in there to win,” said Morris, who's a two-time Olympic champion.

“I’ll be very motivated to play in this Brier. As a new team, this is our first time in a major event together, so that’s always nice motivation for us. We’re very much looking forward to this.”

Another looming factor for teams is entering the “bubble” – similar to the model other major sports organizations have used, such as the NBA and NHL.

Athletes will isolate from friends and family to limit any potential COVID exposure, and stay at a hotel in hub city Calgary, playing games when scheduled.

Going into the odd type of quarantine, Morris, who has a young family, said he’s been planning FaceTime and Zoom sessions in downtime and is approaching the experience with a positive mindset.

“You’re going to be living in a hotel room for the next month, or two months, depending on how the events go,” said Morris.

“Ten years ago, this would have been different for me because I didn’t have a family and I wouldn’t be really missing anyone as much going in there. Now I have a wife and two kids at home and obviously it’s not ideal not seeing them for a lengthy period of time, so you’ll have to make sure you prepare for that accordingly because you don’t want that to be a distraction for you while you’re competing.”

Following the Brier is the 2021 World Men's Curling Championship, also held in Calgary's bubble from April 2-11.

The championships will also be played in Calgary’s bubble in February and March.