Hundreds more ordered out of their homes in B.C. by threatening wildfires

A provincial state of emergency took effect in B.C. at midnight as Public Safety Minister Mike Farnworth says expected strong winds have the potential to whip up existing wildfires and force mass evacuations.
Jul 21, 2021 10:15 AM By: Canadian Press 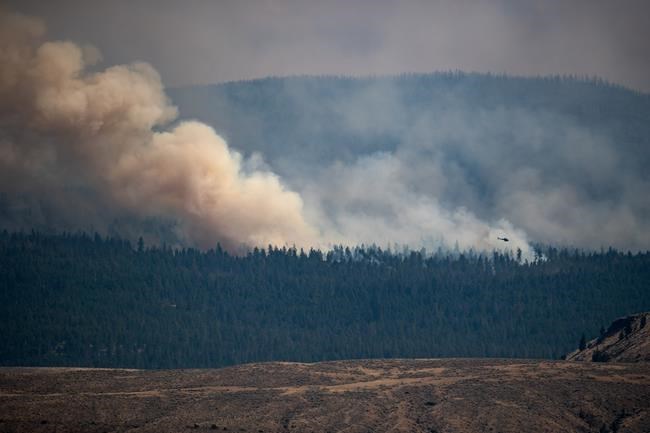 A helicopter flies past the Tremont Creek wildfire burning on the mountains above Ashcroft, B.C., on Friday, July 16, 2021. THE CANADIAN PRESS/Darryl Dyck

Hundreds more British Columbians have joined the thousands already forced from their homes by wildfires as several local governments ordered residents to get out Tuesday night ahead of nearby blazes.

The Regional District of Kootenay Boundary declared a local state of emergency and ordered 122 properties evacuated, while residents in another 304 properties have been put on alert as the 20-square-kilometre Nk'Mip Creek wildfire sweeps east, parallel to the U.S. border.

The fire, sparked Monday, has already forced evacuations between the south Okanagan towns of Oliver and Osoyoos.

It's one of nearly 300 burning across the province — including 39 threatening or highly visible wildfires that the Ministry of Forests says have forced evacuation orders for more than 3,000 properties.

At least half a dozen other evacuation orders were issued Tuesday night, including one affecting the community of Fauquier in southeastern B.C., while a large part of the Shuswap district of Sicamous was also evacuated and more homes are on alert after a vehicle crash caused a fire that spread to nearby bush.

A provincial state of emergency took effect in B.C. at midnight as Public Safety Minister Mike Farnworth says expected strong winds have the potential to whip up existing wildfires and force mass evacuations.

More than 3,000 firefighters and support staff are on the fire lines, including crews from Alberta, New Brunswick, and Quebec, while about 100 firefighters from Mexico are due to arrive this weekend and the federal government is sending 350 Canadian Armed Forces members.

Farnworth said he welcomes the help from the military because B.C.'s available resources are fully assigned.

"Air support from Canadian Forces has already proved invaluable in moving crews and equipment throughout the province and aiding in precautionary evacuations," he said in a news release.

The statement does not say when the Armed Forces crews will arrive in B.C., but it says they will be assigned to hold existing fire lines, suppress hot spots and build new fire lines on the highest priority blazes.

This report by The Canadian Press was first published July 21, 2021.