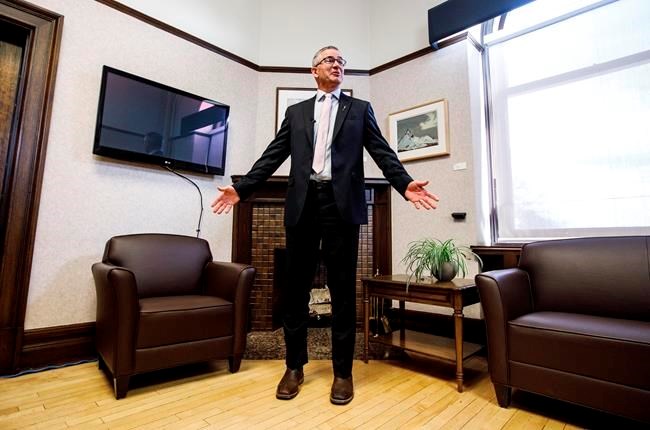 EDMONTON — Alberta is to bring in its new budget Thursday while juggling a sluggish economy, multibillion-dollar deficits and escalating conflicts with public-sector workers.

"There continues to be heavy lifting in front of us as a province. But I will say this: we are on track," Finance Minister Travis Toews said Wednesday.

"We will be putting a real focus on job creation," said Toews, who added that a plan remains in place to balance the budget by 2022-23.

In keeping with tradition, Toews displayed for media the footwear he will wear for budget day. He brought out the same thing he wore last year — his size 10 cowboy boots — to signal that the work continues.

But the province has shed about 50,000 full-time jobs. And this week Teck Resources decided not to pursue a highly anticipated $20-billion oilsands mine project in northern Alberta.

On top of that, the province has budgeted the benchmark West Texas Intermediate oil price at US$57 per barrel for this year and rising to $63 in two years.

However, global conditions, including reduced demand from China due to the novel coronavirus, have the WTI hovering around the $50 mark, well below what the government has been hoping to take in.

The NDP Opposition has noted that Canada's six private-sector banks project Alberta's economy will grow by 1.7 per cent in 2020, a full percentage point lower than the prediction in the UCP's first budget last fall.

Toews acknowledged the situation. "What we see today out there in the global economy represents the volatility risk that we have in Alberta.

"It just further reinforces the rationale to manage and control what we can control."

Part of that is an ongoing effort to redirect or reduce spending to get more value for money, particularly in big-budget areas such as health and education.

It's a fight that's been met with rising anger as the government looks for wage cuts from some public-sector workers, wage freezes and benefit cuts from nurses, and changes to doctors fees and benefits.

Phillips said the footwear represents Albertans who will continue to feel the effects of Kenney's cuts while the government helps its business friends with a corporate tax cut that will soon be down to eight per cent from 12 per cent.

"I'm expecting to see a plan, unless they actually change direction, that blows a hole in the budget," said Phillips, who added that less revenue will mean even deeper cuts to health and education.

Economist Trevor Tombe said Kenney's government is in for a squeeze, particularly given that current oil prices and projections into the future are less than what it had planned.

"They're going to need to respond to a dramatically different fiscal and economic environment than they faced even as early as last fall," said Tombe of the University of Calgary.

The current budget projects a deficit of $8.7 billion on $50 billion in revenue, with debt projected to rise to $72 billion this spring.

Edmonton Meals on Wheels continues daily meal delivery
Apr 7, 2020 2:00 PM
Comments
We welcome your feedback and encourage you to share your thoughts on this story. We ask that you be respectful of others and their points of view, refrain from personal attacks and stay on topic. To learn about our commenting policies and how we moderate, please read our Community Guidelines.