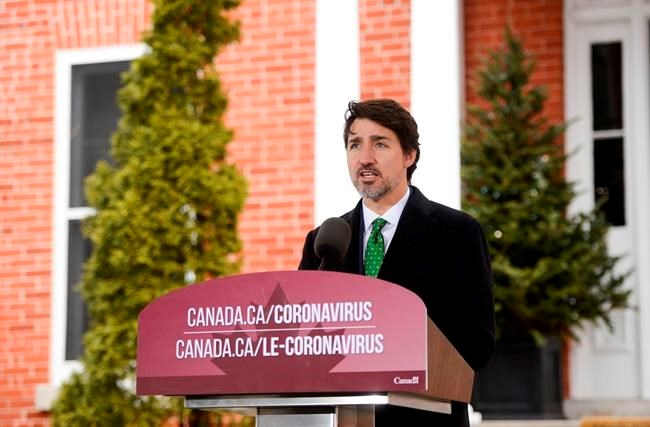 WASHINGTON — "America First" rhetoric and disdain for free trade are old news in the Donald Trump era, but with countries in a life-or-death scramble to stockpile gowns, gloves, masks and ventilators, protectionism these days isn't such a dirty word.

Even an ardent free trader like Prime Minister Justin Trudeau let slip an interesting — and vaguely isolationist — turn of phrase Tuesday as he laid out Canada's efforts to procure scarce personal protective equipment for the country's health workers.

"We understand that countries around the world are taking their own approaches," Trudeau said during his daily doorstep briefing. "We will continue to co-ordinate as much as possible, but every step of the way our priority will be ensuring that Canada is able to take care of its own."

No one would suggest, even in the grips of a life-changing pandemic, that Trudeau's Liberal government is losing its religion when it comes to globalization. But trade experts agree that free trade, which has already been under siege in the U.S. and elsewhere, could well emerge from the COVID-19 outbreak on life support, if it manages to survive at all.

The promise of free trade is that if people can buy and sell without obstacles at national borders, production will shift to where it's most efficient. But that also means that countries will come to rely on foreign imports for a lot of their goods while their own industries focus on exporting whatever products they're best at making.

"Everybody is almost sort of retrenching to a nationalism that runs contrary to what the whole spirit of globalization and trade liberalization has traditionally been about," said Adam Taylor, a one-time adviser to the previous Conservative government who now heads up Export Action Global, an international trade consulting firm.

Indeed, U.S. Trade Representative Robert Lighthizer, a protectionist who made life difficult for Canada during the 13-month effort to renegotiate the North American Free Trade Agreement throughout 2018, sounded in his element Monday during an online meeting of G20 trade ministers.

"Unfortunately, like others, we are learning in this crisis that over-dependence on other countries as a source of cheap medical products and supplies has created a strategic vulnerability to our economy," Lighthizer said.

"Let us not make long-term decisions in the midst of a crisis. I suggest that we should get through this together, gather all the information we can, and then make decisions for the future to ensure that these things don't happen to the world again."

The crisis of COVID-19, which by Tuesday had sickened nearly 850,000 around the world and killed more than 41,000, including 3,600 in the U.S. and 95 in Canada, brings to mind the old adage about nothing focusing the mind like a hanging at dawn.

Louisiana Gov. John Bel Edwards warned that New Orleans would be out of ventilators by the weekend and was dangerously low on hospital beds. Michigan, too, says it needs upwards of 10,000 more breathing machines. Israel is supplementing its supply by turning them out from a plant that once produced missiles.

"We cannot remain dependent on procurement from other countries,” Israeli Defense Minister Naftali Bennett said in a statement.

Finding enough ventilators in the U.S. is "like being on eBay, with 50 other states bidding — that's literally what we're doing," said New York Gov. Andrew Cuomo, whose description of U.S. states and the Federal Emergency Management Agency working at cross-purposes made the whole exercise sound like a scene from a Keystone Kops film.

"And then FEMA gets involved, and FEMA starts bidding, and now FEMA is bidding on top of the 50. So FEMA is driving up the price," he said, incredulous.

"What sense does this make?"

Dan Ujczo, an international trade lawyer based in Columbus, Ohio, said the pandemic is unlikely to mean the end of free trade in North America, given just how interconnected and symbiotic Canada and the U.S. have become. But what it is doing is shining another ray of "disinfecting sunlight" on the complex nature of the trade ties between the two, and the problems they can create.

"I don't think people fully understood how interconnected our businesses were and the pro free-trade folks were looking at that with optimism — you know, 'See how connected we are,' " Ujczo said in an interview.

Others, however, have come to see disadvantages — and the advent of COVID-19, he said, will advance an awakening in the U.S. that has only accelerated with the election of Donald Trump.

This report by The Canadian Press was first published March 31, 2020.

Police say assault where boy was hit in head with hammer appears unprovoked
May 31, 2020 5:41 PM

Cities board up windows, scrub out graffiti as Americans brace for more chaos
May 31, 2020 4:30 PM
Comments
We welcome your feedback and encourage you to share your thoughts. We ask that you be respectful of others and their points of view, refrain from personal attacks and stay on topic. To learn about our commenting policies and how we moderate, please read our Community Guidelines.